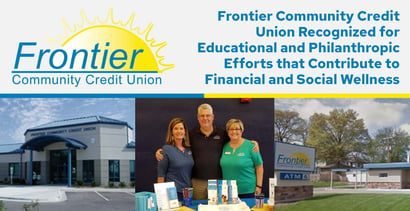 As Managing Editor for BadCredit.org, Adam maintains a diligent focus on helping our audience achieve greater financial literacy and improved financial wellness through informational articles and industry spotlight pieces that highlight products and services that specifically cater to the unique needs of subprime and midprime borrowers.

In a Nutshell: Frontier Community Credit Union began by serving the military personnel based at Fort Leavenworth in Kansas, but has expanded to serve a wide range of members. It provides financial education resources to public school students, community members, veterans, and armed service personnel. The credit union also supports local organizations and initiatives that work to improve the quality of life for everyone. For its contributions to members and those in its Kansas service areas, Frontier Community Credit Union has earned our Editor’s Choice™ Award for Community Commitment.

In April 1954, a small meeting took place in the Kansas home of Lyle and Ivy McCoy. At that gathering, the McCoys and eight other individuals became the founding members of Fort Leavenworth Credit Union, which they established to serve the civil service personnel stationed at the U.S. Army installation and their families.

And it now serves Leavenworth, Atchison, Douglas, Jefferson, Johnson, and Wyandotte counties, as well as active military members or veterans within a 100-mile radius of Fort Leavenworth and the immediate families of current Frontier Community members.

But throughout its long history, the credit union’s vision has been about more than institutional growth and success.

“We provide financial products and services and encourage and educate our members to help manage their financial well-being. That means everything from one-on-one conversations to offering financial literacy resources,” said Letha Higgins, VP of Member Experience at Frontier Community Credit Union.

It demonstrates that commitment through its employee volunteer program, free educational resources for children and adults, philanthropic support, and the funding it provides through direct donations.

For its dedication to those in its Kansas service areas, not just its members, Frontier Community Credit Union has earned our Editor’s Choice™ Award for Community Commitment.

Frontier Community Credit Union helps students get on the path to financial security early by making Banzai Financial Literacy Software available to local elementary, middle, and high schools. If any teacher wants access to the program, Frontier Community pays for the subscription, and those resources become available to the rest of the school as well.

“For example, one of the high schools in our area could say they would like to use it, and one teacher goes and subscribes for the program,” Higgins said. “That, in turn, makes it free for all of the rest of the school to use.

Maybe a home economics teacher requests it, but then math teachers, lifestyle teachers, or anyone else can use it from that point. That has been going on for three years now, and we have served 5,800 students in our area.”

And the credit union’s support for youth doesn’t stop at financial literacy. Its employees also regularly volunteer at the local office of Court Appointed Special Advocates (CASA), a national child welfare advocacy organization. Its support enables CASA employees to focus their time and efforts on the organization’s mission.

“We go into their office a couple of times a month and have a set schedule of working there for three hours at a time,” Higgins said. “It may be things as simple as vacuuming their floors or organizing the clothing donation or other tasks like that – things they can’t get to because they don’t have staff who can do things outside of their daily duties.”

Not everyone can access the benefits of Banzai’s financial education program through a school. So, to help adults build their financial literacy skills, Frontier Community offers Banzai content for adults as well as material supplied by Everfi. The credit union partners with community organizations to tailor this content to particular audiences who need it.

“We work with these community partners and help them build financial literacy sites for the audiences they work with,” Higgins said.

Beyond education, Frontier Community provides financial support for charitable organizations and initiatives operating in its communities. One of these is Home for the Homeless, which benefits Interfaith Community of Hope, a local shelter.

“We were their very first donation toward a new building because they needed a new location,” Higgins said. “Now, that building is built, and because of our efforts, more people came forward to donate funds.”

Frontier Community continues to support for Home for the Homeless, and for every home loan or home equity loan the credit union provides, it donates $100 to help the initiative pay for facility costs.

“It is unique to our area. Nobody else is doing anything like this,” Higgins said. “We have a hashtag campaign on Twitter that we use to keep track of it, and the community can keep track of it. That’s been received very well. We take photos with homeowners and then post a picture that says, ‘My home loan makes a difference.’ It has really taken off.”

That is just one example of how Frontier Community leverages its financial products for social good. Another is its United Way Skip-A-Pay program, which begins each November and lasts through January. Qualified members can elect to skip a loan payment with no penalties; instead, they pay a $20 fee, which is donated to the United Way of Leavenworth County. That gives members some financial breathing room while supporting a good cause.

Frontier Community also launched an employee volunteer program in 2018 through which the credit union compensates employees for eight hours of volunteer service. And its success has prompted Frontier to consider doubling or tripling that paid volunteer time.

“We have ordered T-shirts so that when we’re out and about doing these things in groups, people know that it’s the credit union,” Higgins said. “And other organizations see what we’re doing and are trying to catch up with us. We’ve raised the bar with what we’re doing in the communities.”

Giving Back to Military Servicemembers and Veterans

Frontier Community was founded to serve Fort Leavenworth’s base personnel and their families. In 1956, it moved its offices out of a civilian home and into an on-base facility beneath the personnel office.

Nearly 50 years later, the credit union changed its name and opened membership to civilian communities. But through more than a half-century of growth and change, Frontier Community remains dedicated to serving and supporting military servicemembers and veterans.

For those individuals, Frontier Community provides financial education in partnership with Military Saves, a component of the America Saves program that is operated in collaboration with the Department of Defense. The goal of Military Saves is to foster financial wellness and security, but it is specifically aimed at reaching and educating military members, veterans, and their families.

“The Banzai program is the biggest piece of our financial literacy efforts with 30 schools sponsored and 5,800 students impacted since 2015,” Higgins said.

Frontier Community also works with Team Fidelis, which is a veteran suicide prevention program. The credit union donates a percentage of all car loans to support the program’s work, and, in its first year, provided nearly $17,500 in financial support.

Additionally, Frontier Community supports the Army’s Family and Morale, Welfare and Recreation (FMWR) programs, which provides resources to the surviving spouses and families of fallen servicemembers. Frontier donates $1,500 to the cause annually, and the Armed Forces Financial Network matches that donation. To date, Frontier and the Armed Forces Financial Network have provided $24,000 to the families of those who have sacrificed their lives in service to the country.

To that end, the credit union’s mortgage officers are preparing to offer seminars tailored to first-time homebuyers.

“Whether you’re in your 50s and 60s trying to figure out how to do it later in life, or whether you’re new to it as a young person, we want to educate our community members on how they can do that,” Higgins said. “That’s another key in educating the public on how to be better with their finances.”

Frontier Community is eager to offer those seminars and other services and support to new communities. Another way the credit union plans to expand its reach is through mergers, such as the recently announced merger with River Cities Community Credit Union in Atchison.

“They already have some things going on, but we want to build on those,” Higgins said. “They have a CASA program there, and we already work with the one here in Leavenworth, and we want to do the same in Atchison. We know they have United Way programs and some of those things, too, so we’ll build on that.”

This expanded reach will bring Frontier Community’s brand of caring and commitment to more members and communities. From volunteerism to financial support to community education, Frontier will continue to foster financial wellness among the members it serves.