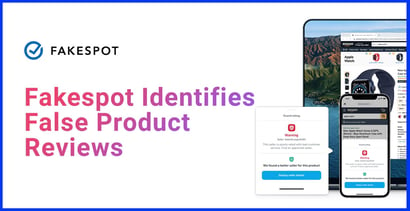 In a Nutshell: Unreliable reviews are a problem on online marketplaces, whether it’s false testimonials or malicious attacks on competitors. They can make it challenging for consumers to compare prices and evaluate purchases objectively. But Fakespot brings peace of mind back to the process by helping consumers identify and weed out unreliable reviews in their many forms. Fakespot AI tools analyze and account for new trends in reviews, and its team conducts covert human research into emerging scams.

Saoud Khalifah is a fitness buff. He exercises regularly and focuses on diet and nutrition as a critical aspect of health. That prompted him to order some supplements from Amazon Marketplace, and Khalifah based his informed purchase on hundreds of five-star reviews.

But instead of receiving a product that would help him maintain his healthy lifestyle, he got capsules filled with sawdust.

So Khalifah, a software engineer, set out to solve the problem of misleading or deceitful reviews and ratings for bad products. His solution was an artificial intelligence tool that analyzes reviews for accuracy and weeds out fakes.

His initial intention was making a solution for his own personal use, but Khalifah realized that most online shoppers face the same problem. So he decided to bring the solution to others by developing Fakespot.

Gross had also been the victim of fake product reviews. A baby monitor he bought through Amazon nearly burned his house down, and many other consumers experienced the same hazard. When he filtered the baby monitor through Fakespot, the product reviews plummet to a more appropriate 1.5 stars.

Even if the products aren’t bogus supplements or dangerous baby monitors, fake reviews can cause real harm to consumers. Spending money on bad products can lead to debt when consumers buy others to replace them. Fakespot users can get more insight into what they’re buying and find out if the product is worth the price.

The marketplace model — used by Amazon and Walmart — enables anyone to set up a virtual storefront and sell products. In theory, that seems like simple competition, but prices can only drop so low. When a vendor can’t compete on price or product quality, they may turn to fake ratings and reviews to gain an edge.

Those can take the form of false positive reviews of their own products or false negative reviews of a competitor’s offerings. For example, a small makeup manufacturer may target a more prominent brand by leaving reviews that the latter tests its products on animals. Then, on its own reviews, the smaller manufacturer will post a fake review stating that its products aren’t tested on animals, unlike that other big brand, making the same lie work double duty.

A conscientious consumer who sees that and does no additional research may choose the smaller, seemingly more ethical company. But when the product arrives, it is often inferior to that of the big brand.

“You’ll see this a lot in cosmetics, and we see a lot in electronics,” Gross said.

In the case of electronics, devices will skillfully mimic a better product at a much lower price point and produced with less quality. Functionality, features, and battery life may be significantly sub-par, and by the time a consumer realizes it, they have missed the return window. That costs consumers money and contributes to ecological damage as well.

“Most returns end up just going to a landfill,” Gross said. “Then you also have the environmental impact of the shipping costs, all of that pollution from the truck coming to pick it up and the plane returning into the warehouse. So you have the initial effect of getting ripped off by fake reviews, and you also have the damaging effect to the environment from all those returns.”

Fraudulent Reviews May Be Difficult to Spot

Unreliable reviews can come from a range of sources. The first is from someone who creates many accounts and leaves simple, generic reviews with five-star ratings on their own products.

“Anybody could see with a naked eye that something is wrong,” Gross said. “Those are basic, unverified reviews.”

Fake verified reviews are harder to detect. These result from sellers paying people to buy a product, which makes them a verified purchaser. Then that paid purchaser leaves an unequivocally positive review regardless of the product’s quality. The payment can either come before or after the review as a gift card or a refund. But it’s still a biased review that presents misleading information for real consumers trying to evaluate a product.

“It’s very hard for the platforms to detect this type of activity,” Gross said. “People have been doing that more now.”

Another recent trend are reviews that are AI-generated, which combine the two other approaches. Instead of paying several different people to write fake reviews, sellers make a relatively small investment in software that writes the reviews for them. Then, they create multiple accounts, buy their own products, and post machine-generated reviews.

“That is a new flavor of fake review that we’re seeing, which is just another tool at a non-reputable sellers’ disposal,” Gross said.

Fakespot leverages its own AI technology to combat those review schemes. Its algorithm draws on billions of reviews and millions of seller profiles to create a model of reliable and unreliable versions. It’s constantly fed new types of legitimate and false reviews to keep up with scammer innovations.

Fakespot also stays ahead of fraudsters by going undercover in fake review farms. Posing as sellers, Fakespot team members gather information on new methods and techniques, which it uses to boost its effectiveness and protect consumers.

That can help weed out fake reviews and fake products. For example, if a listing for an Apple product on Amazon has a significant number of unreliable reviews, something is wrong.

“Apple is a very reputable company. They don’t use fake reviews, and they have no need to use fake reviews because people are going to buy their products,” Gross said. “In that listing, you will see users complaining about used and counterfeit AirPods being sold on Amazon and then getting them. So why is that star rating not reliable?

Well, because if you buy it from Amazon and that listing, you have a 1 in 5 chance of getting a pair of counterfeit AirPods.”

That doesn’t reflect on the desired product itself but on the integrity of the seller and knock-off manufacturers. Fakespot helps consumers get reliable opinions on products by filtering false reviews and exposing counterfeit products.

Fakespot is on a mission to help consumers feel confident in their purchases, even when they can’t see what they’re getting before buying. The product is available as a browser extension compatible with Chrome, Edge, Firefox, Safari, and Brave, and also as a mobile app for Android and iOS.

“Our mission is to bring trust and transparency back to the internet, starting with ecommerce,” Gross said. “We’re doing that, and we provide a vital service for consumers.”

Reading reviews and testimonials is an essential aspect of comparison shopping, whether the items in question are nutritional supplements, a baby monitor, or a more substantial purchase like an appliance or a car. But with so many unreliable reviews in the ecommerce space, knowing what information to trust can be challenging.

That can be the difference between a satisfied customer and one who buys a useless or even dangerous product.

“We all become kind of programmed to do things too fast online,” Gross said. “Convenience has given us this warm, fuzzy feeling that this is so easy. But if you spend five to 10 minutes to scroll down and look at those reviews, your eyes will be open.”

How FlexShopper is Revolutionizing the Rent-To-Own Industry