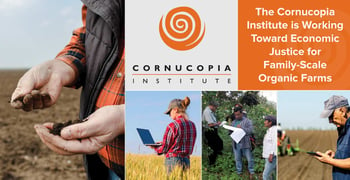 In a Nutshell: The world of organic farming is plagued by varying interpretations of what the word “organic” actually means. Inconsistent interpretation and enforcement of the law by both the National Organic Program (NOP) and certifiers has created an uneven playing field. The Cornucopia Institute is fighting for economic justice for authentic, family-scale organic farmers who strive to stay true to the spirit and letter of the law. While industrial operations design systems to maximize profit, the best organic farmers are motivated by more than money. But, those who benefit from the more loosely applied definition of “organic” — often large, corporate producers — put small, ethically run farms at a competitive disadvantage.

Careful with that kale. Step away from those strawberries. They might not be as healthy as you think.

The USDA has identified residue from 225 pesticides and pesticide breakdown products — some known as potential carcinogens — on America’s conventionally grown produce. Based on this information, the Environmental Working Group lists strawberries, spinach, and kale as the top three most contaminated produce items atop its annual Dirty Dozen list.

Of course, the most obvious way to avoid those potentially harmful pesticides is to go for the organic option.

Most people understand that organic fruits and vegetables are grown without the use of pesticides and chemicals, and organic dairies and egg farms raise livestock humanely with access to green pastures and sunshine

If only it were that simple.

The Cornucopia Institute points out that even the organic label now requires that consumers do their homework for the foods they purchase. While organic always means free from GMOs and toxic pesticides, two different “organics” have arisen in recent years: authentic family-scale organic that follows and exceeds the organic rules and factory-style organic. Additionally, words like “natural” and “humane” on foods that are not USDA-certified organic essentially mean nothing.

The discrepancy in organic labeling arises from different organic certifiers applying disparate interpretations of the standards during their review and certification of organic farms. This imperfect certification system means that different practices can carry the same organic label — which certainly may be misleading for consumers.

But the small-scale organic farms that are actually trying to make a living by producing truly organic foods in an ethical way are the ones being hit the hardest by the inequities in the system.

That’s why The Cornucopia Institute strives not only to educate the public about these issues, but it works to protect family-scale organic farms in an increasingly corporate industry.

Cornucopia Serves as a Watchdog for Small, Organic Farmers and Advocates on Their Behalf

“The organic industry was supposed to be a safe haven for ethical farmers, but those same farmers are being pushed off the land — and have been for decades,” said Marie Burcham, Cornucopia’s director of domestic policy.

“It’s a familiar story: large corporate farms are edging out their smaller competitors by banking on economies of scale, finding regulatory loopholes, and even outright breaking the rules,” she said.

The Cornucopia Institute was originally founded in an effort to examine and rectify these inequalities in the organic dairy farming industry, but the group’s mission quickly expanded.

The Cornucopia Institute advocates for organic farms that strive to stay true to the spirit and letter of the law.

“We’re a farm policy research group,” said Burcham. “We work to educate consumers, advocate for policies that protect ethical farmers, and act as a corporate and government watchdog.”

The Cornucopia Institute takes a variety of different approaches in advocating for family-scale organic farms because the political and economic landscapes are always changing.

In the past, the organization has been very active in the regulatory arena, using political engagement and lawsuits as tactics a number of times. While often highly impactful, Burcham acknowledges these methods can sometimes be slow and frustrating.

More recently, The Cornucopia Institute has emphasized the importance of educating wholesale buyers and consumers to make purchasing decisions that impact the marketplace.

“We do research projects on different sectors of the industry to highlight the best organic producers and to expose ‘organic’ factory farms,” Burcham said. ”Provided with insider knowledge about products, such as organic dairy, eggs, meat, and hydroponically produced fruits and vegetables, consumers can vote with their forks.”

“Consumers who buy organic tend to be label readers and do more research on the foods they are consuming,” Burcham said. “The truth is our most powerful weapon.”

In March, The Cornucopia Institute released an investigative analysis on the organic industry and a guide that rates all 45 domestic certifiers. The report and associated guide empower farmers to make more informed choices regarding the certifiers with whom they choose to do business.

Food processors and farms pay the certifying companies for their services, which can lead to relationships with an inherent conflict of interest. This industry structure can also lead to products being certified as organic that are not in line with how most consumers would interpret the meaning of organic.

The latest report from The Cornucopia Institute shines a light on shortcomings within the world of organic farming.

“The USDA’s poor oversight of federally accredited third-party certifiers has paved the way for illegal output from ‘factory farms’ that now dominate the $50 billion organic market basket,” according to a news release from the institute.

The Cornucopia Institute alleges that many organic certifiers have evolved from nonprofits dedicated to promoting ethical, humane, and sustainable organic farming practices into large corporations that are more focused on pursuing relationships with multibillion-dollar corporate agribusinesses.

The report primarily focuses on three key issues within the organic industry.

In this report and the accompanying guide, The Cornucopia Institute identifies wide variances in how organic certifiers interpret regulations. The broad variation often works to the benefit of large corporate farms and puts smaller, ethically run farms at a competitive disadvantage.

“Farmers can use our Certifier Guide to learn which certifiers are dedicated to the letter and intent of organic law and which are undermining core principles of the industry. We’ve had several emails from new organic farmers, thanking us for helping them choose a certifier whose values align with their own,” Burcham said.

More Than Money: Family Farmers are Motivated by Passion and Community Involvement

“The organic farming movement is superb for economic development in rural America because it has allowed family farms to stay in business and keep that income flowing in the local community,” Burcham said. “Through our research and reports, we hope to support those systems and the consumers that rely on them to get healthy, safe food for their loved ones.”

The Cornucopia Institute maintains that small-scale, family farms will have more opportunities to thrive as they — and consumers — are armed with more knowledge.

Many small-scale organic farmers strive to be good stewards of the land and support their communities, while large corporations seek to maximize profits.

“The majority of organic farmers are honest and truly believe in what they are doing—regardless of USDA oversight,” Burcham said. “These ethical farmers rely on relationships with consumers more than the ‘big guys.’ Those relationships are what allow them to steward their land, support their communities, and provide us with nutritious, wholesome food.”

Burcham also points out there are some large farms that operate ethically. But the larger the farm, the more challenging it becomes to remain true to the nature of what organic means for many consumers.

“Organic is not just a marketing slogan — or it shouldn’t be,” Burcham concluded. “Industry stakeholders have a powerful voice and they can use that voice to protect what it means to be truly organic by supporting better land management, ethical justice for farmers, and good food for everyone.”