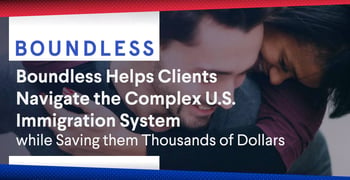 In a Nutshell: The process to obtain a green card through marriage or to become a U.S. citizen has always been painfully slow and lacking in transparency. Boundless is a modern immigration company that combines technology and information to make the spousal visa and naturalization processes cheaper and easier than ever before. The company helps applicants navigate the dense paperwork through a series of simple questions and populates the documents on their behalf, prints it out, and delivers the complete application to their homes. Clients also gain access to immigration attorneys during the process. Boundless launched in 2017 but already has a proven track record with a 100% success rate.

When Xiao Wang moved to the U.S. as a child, he said his family spent almost five months worth of rent money on an immigration attorney because the process was so complex and high stakes, and they still weren’t quite sure if they were doing everything right.

“I don’t think anyone’s ever said, ‘Wow, like, my immigration process was awesome — super easy!’” said Wang, Co-Founder and CEO of Boundless, a modern immigration company in the U.S. that helps people through the application to obtain green cards through marriage or U.S. citizenship.

Millions of immigrant families still face these same challenges on a regular basis today, he said. The process Wang’s family experienced has stuck with him over the years, and as an adult, he found himself still asking why, exactly, is the immigration process so difficult.

“I interviewed hundreds of families, immigration lawyers, and government officials and then realized this is fundamentally an information problem,” he said. “There is so much bad, inadequate, or misleading information out there. People are terrified, especially in a world where immigration regulations are changing rapidly.”

Wang said he and Boundless Co-Founders Doug Rand and Serdar Sutay began to explore if they could use technology and data in a new way to make sure people feel confident about their immigration process. And at the same time, the team looked for ways to make the process cheaper than what traditional attorneys charge.

Boundless launched in 2017 with the mission to empower families to navigate the immigration system more confidently, rapidly, and affordably.

“Just like millions of other families, we’ve had to choose between paying thousands of dollars in legal fees or spending months trying to figure out how to do everything ourselves,” according to the Boundless website. “We knew there had to be a better way.”

A Streamlined Process for Attaining a Marriage Green Card

Upon its launch, Boundless offered assistance for people seeking a marriage green card, or spousal visa, for cases in which one member of a married couple is not a U.S. citizen. Today the company also offers assistance through the naturalization process for those seeking U.S. citizenship.

Xiao Wang is Co-Founder and CEO of Boundless.

“The outcome we’re driving toward is to help you have an application that can be successful,” Wang said. “We’ll do everything we can to get you there. That includes the Boundless website, which collects information and documents, our team that guides you through the process, as well as a lawyer.”

Boundless is not a law firm, but it works with a network of independent immigration attorneys.

One of the biggest advantages Boundless offers is that it takes away the headache of dealing with a multitude of paperwork. Applicants simply answer a series of questions — which typically takes less than two hours — and the Boundless app populates the information in the appropriate forms for you.

Additionally, a Boundless team member will help each applicant steer clear of common mistakes during the process and ensure the documents are ready to be reviewed by an attorney. Then, an independent immigration attorney answers any questions and reviews the entire application.

“Leave the printing to us  —  you’ll receive the entire printed package at your doorstep, with clear instructions on how to sign and send it to the United States government,” according to the website.

The independent attorneys help applicants understand how to respond to government questions about their applications and prep for their in-person interviews.

“We’re one-fifth the price of traditional attorneys,” Wang said. “If you have a case that works with our process, we’re able to basically provide the fastest, most affordable, and complete way of producing an application for the government.”

Becoming a U.S. Citizen is Now Easier to Navigate

“Fundamentally, immigration is an industry that hasn’t changed in generations,” Wang said. “People today have the same problems that I had when my family came to this country a generation before.”

Wang said the application for U.S. citizenship is one of the most important application processes in an immigrant’s life, and applicants generally don’t have a good sense of how it all works. Yet, they only have one shot to get it right.

“In my mind, this is exactly what technology and data are built for — to be able to help people by delivering a more informative and personalized experience,” he said.

As with people seeking marriage green cards, Boundless provides in-depth guidance through the whole naturalization process, including having your application reviewed by an immigration attorney.

“The largest delay for people getting their application submitted to the government is the fact that they don’t have all of their documents,” Wang said. “It’s about having the official government documentation — birth certificates, marriage certificates, divorce certificates, all the visas you’ve had in the past, your passport — all of those.”

Boundless provides resources for applicants to easily learn which documents they need so as not to delay the process.

“Becoming a U.S. citizen is the next logical step for most green card holders, especially if they intend to stay in the United States for the long term,” according to the Boundless website. “U.S. citizenship provides many advantages not available to green card holders.”

Boundless Garners Positive Feedback and a 100% Success Rate from Customers

Of course, all of this may sound nice but Boundless’s proposition is supported by the fact that it boasts a 100% success rate from its customers.

Yet, the company still provides reassurance that its services are authentic.

“Is Boundless a legitimate company?” reads the website’s Frequently Asked Questions section. “Yes! We understand your skepticism. Immigration is daunting enough. Using an online service may feel even more unfamiliar.”

The company reinforces its reputation by noting that it received the Better Business Bureau’s “Business of the Year” award and has been featured in The New York Times, NBC News, Univision, and more.

Boundless has numerous stories from happy couples who have used its marriage green card services.

“You can reach us via phone, email, and live chat within the app,” according to the website. “You’ll always talk to a real person when you contact us. Our service combines the convenience of technology with the dependability of real, live humans.”

The company has been praised by customer and immigration officers alike, according to the website.

In September 2017, Madeline, a Missesota native, married Jonathan, her Chilean fiancé. After speaking with attorneys and considering going through the green card application by themselves, the couple procured Boundless’s services and were pleased with the results.

“At one point, I had a general question about how the government defines address history, and instead of having to do more research myself, the live chat was very helpful,” Jonathan said. “And with you guys, we got to ask an immigration lawyer all the remaining specific questions we had. I’m happy with our decision.”

The Boundless website is packed with similar stories from happy clients and receives high marks from Google Reviews and Trustpilot.

Wang said one of the most important pieces of information he likes to convey to people who plan on going through the immigration process is that the overall processing times have slowed down dramatically over the past couple of years.

Because of the shifting nature of the immigration process, Wang said it’s more important than ever for those seeking green cards or citizenship to understand their own timelines and procedures, so as not to delay the process further.