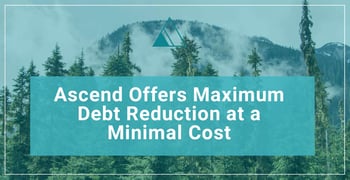 In a Nutshell: Even those who make plenty of money can find themselves struggling with debt. From debt relief to bankruptcy, those who find themselves massively indebted often don’t know how best to recover. Ascend was designed to leverage technology to help consumers make that important decision using information about their unique personal debt situation, adding clarity to what can often be a confusing path back to solvency.

Add to that data from the Federal Reserve Bank of New York that consumers racked up $787 billion in consumer credit card debt for the second quarter of this year, and it’s clear many Americans are overburdened with debt.

That level of debt can lead to financial issues down the line, from not being able to pay for an emergency car or home repair to possibly facing the risk of bankruptcy and foreclosure. But confronting the threat of financial failure head on is possible thanks to platforms like Ascend.

Ascend is a free bankruptcy and debt relief calculator that helps consumers determine their options to get out of debt. The startup helps users understand the pros and cons — and the cost — of choosing to file Chapter 13 or Chapter 7 bankruptcy, or whether they are better candidates for debt settlement and debt management.

Ascend Was Born Through Personal Experience

Ascend CEO and Co-Founder Ben Tejes recalls how, as a boy, he once put $10 he had earned from his paper route into an envelope and gave it to his mother in hopes that it would bring her some financial relief. Instead, it brought tears to her eyes.

“My family had quite a bit of debt growing up,” Tejes said. “That guided my passion for personal finance, with a focus on helping people get out of debt.”

When Ascend launched in 2018, it focused on debt settlement. But Tejes said he soon realized that this was not always the right path forward. Focusing exclusively on one way to fight debt did not solve the problem of helping consumers learn how to save and spend money effectively.

“I didn’t see a lot of players that were really consumer-first or friendly, and most charged high fees without saving the consumer a lot of money,” he said. “I also wanted to make sure that customers are getting the best option for them, but I wasn’t able to confirm that. I didn’t understand the options really well.”

So Ascend became a service for people willing to make the necessary changes to get out and stay out of debt.

“(Debt) can give you tunnel vision,” Tejes noted. “Instead of thinking about retirement 20 years down the road, you can only think ‘How am I going to get out of debt?’ And it can feel like prison for some people.”

How Ascend Takes the Pain Out of Personal Finances

Ascend helps its customers by using data, machine learning, and automation to maximize debt reduction and minimize cost. It teaches fun, simple, habit-forming steps to help its users stay out of debt. The company is always learning from and growing with customers to meet their needs and build a financial product that best addresses their debt and how to eliminate it.

Clicking on the Get Started link on the main page of tryascend.com takes customers to the Debt Relief Comparison Calculator. Customers have the option of getting a quick estimate on debt relief that takes two to three minutes, or a more precise estimate that takes five to 10 minutes to complete.

“Most of the (debt relief) calculators have similarities,” Tejes noted. “The process involves understanding your income and expenses, and then we’re able to take all of that information and provide all these
different options.”

Regardless of the estimate customers choose, Ascend will offer the pros and cons of different debt relief options, including debt settlement, debt management, and bankruptcy. Ascend will also offer a free analysis of the customer’s data, as well as personalized data outputs that are ready to be sent to a provider.

“There’s a purpose behind every question we ask,” Tejes said. “We try to make sure we have an option for each (service), and then we partner with different providers of that service.”

All customers need to do during the initial contact is provide Ascend with an understanding of their debt, income, and expenses, as well as an email for analysis. A current pay stub is handy, but not required.

“We encrypt all data,” Tejes added. “The access levels are extremely limited. And we don’t ask for (personal information) that we don’t need like a customer’s address or Social Security number.”

Customers can also check out the “Frequently Asked Questions” page on Ascend’s website to learn the basics of debt relief and what can be done to help them escape the confines of debt and its many consequences.

The FAQ explains the differences between debt relief, debt consolidation and debt management in an easy-to-read manner. And while Ascend only offers debt relief consulting services, it will help determine
the best solution for customers.

“After you submit your brief survey, an Ascend consultant will contact you to better gauge your financial situation, priorities, and goals,” according to the Ascend FAQ page. “We will then recommend for you what we think is your best approach, even if that means not using our services. We can also refer for you some good, honest companies to work with, or advise you on how to find a good service company.”

But if debt relief is the right option, Ascend will put together a debt relief program, negotiate with creditors to accept much less than the principal value of the unsecured debt, and assist in avoiding future debt accumulation.

“There’s so much stress, so much anxiety that debt can produce,” Tejes said. “There are a lot of things that we can’t control, such as the loss of a job or medical expenses, but debt is debilitating.”

And Ascend considers its customers’ budgets by charging less than its rivals for services. Industry standard rates usually start at around 25% of a customer’s enrolled debt and, to Ascend, that does not seem fair, especially since the customer is seeking help to get out of debt to begin with.

“We keep rates low by keeping our costs as low as possible,” Tejes said. “We automate all the tedious bureaucratic tasks that our competitors still manage manually. We also use historical data to better predict when each creditor will settle, how much they will settle for, and how your funds will best be utilized.”

No matter how hard consumers work to avoid it, financial hardship can happen. And it cannot be resolved with the snap of the fingers.

Even those who make tons of money will encounter these issues. Tejes said that, when he was growing up and saw his family struggle with debt, he presumed that being wealthy was the solution. But he now knows he was wrong. Managing debt starts with learning how to save and spend the right way.

“The taboo around ‘money talk’ and the subsequent lack of conversation created strife in my personal relationships due to differing expectations around money saving and spending,” Tejes said.

Solutions to get out of debt and live a life free of financial missteps are a reality. The first step if you’re struggling with debt is to recognize your financial hardship and visit the Ascend site. Then use the Debt Relief Comparison Calculator to consider your options and take the next steps on your financial journey.

“We’re really excited about helping people get out of debt,” Tejes said. “Ascend is for people who are willing to make a change … to become financially free.”