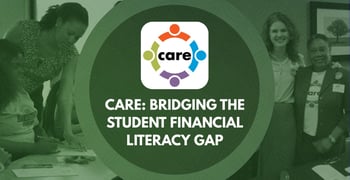 In a Nutshell: The dearth of personal finance education in schools means younger generations aren’t learning the necessary life skills like budgeting basics, saving money, and understanding student loan debt. The majority of states don’t even mandate personal finance as a high school graduation requirement, but Credit Abuse Resistance Education (CARE) programs have been able to reach students in nearly every state thanks to an impressive network of volunteers. Just last year, CARE filled the gap in personal finance education for more than 21,000 high school and college students using interactive presentations with engaging pop culture references.

In his role as Programs Manager for Credit Abuse Resistance Education (CARE), Ian Redman is often immersed in the world of financial literacy education — reading studies and helping to implement programs to help young people learn about things like saving, budgeting, and student loan debt.

“Every week I feel like there’s a new article on student loans and student loan debt, and how students are reacting,” Redman said. “I think that’s really driven the point home to a lot of people that we need to be doing better about financial education, especially as millenials, and even the next generation, are coming up.”

Ian Redman is the Programs Manager for CARE, a nonprofit that helps fill the gap in personal finance education for students.

Redman said he sometimes laughs to himself when he sees a new article about how millennials are killing a certain industry or negatively impacting the real estate market. He knows the financial decisions millennials are making — not buying the expensive diamond engagement ring or delaying home ownership — have less to do with some revolutionary mindset and more to do with things like managing high student loan debt.

“In fact, I’m one of those millennials,” he said. “I have just over $105,000 in student loan debt, and I’m actually moving to a cheaper cost of living housing market — leaving the DC area — because my wife and I can’t afford to buy a home here.”

Redman knows from personal experience the impact student loan debt can have on recent college graduates. He’s a firm believer in the importance of helping young people make the most informed decisions they can about student loans, credit management, and budgeting, and in his role at CARE, he is able to do just that.

CARE aims to increase financial literacy among young adults by providing personal finance workshops at high schools and colleges. Founded in 2002, the program has evolved to have a presence in nearly every state and has kept students engaged with fun activities and pop culture-infused presentations, including clips of actor Ashton Kutcher and comedian Demetri Martin.

CARE’s Success in Tailoring Its Messaging for Students

The CARE program is brought into high schools and colleges by educators requesting it. CARE then sends a volunteer to come to the school to provide an extensive overview of various financial topics.

“Unfortunately, not a lot of families discuss personal finances,” said Anna Flores, who became the first Executive Director of CARE in 2015. And schools aren’t properly addressing the topic either. In a 2017 study on financial literacy in high schools by Champlain College’s Center for Financial Literacy, only five states earned an A for their programs, and 27 states received a C, D, or F.

That’s why concerned educators look to third-party organizations like CARE to bridge the gap.

The CARE presentations are about an hour in length, but often span several days or even an entire semester. Institutions can request the entire curriculum as well instead of just a single topic. Presentations currently cover three main topics: the basics of budgeting and saving, student loans and paying for college, and a complete guide on credit cards.

A volunteer offers students financial help during a CARE program.

Using humorous clips of celebrities young people relate to, including sketches from The Daily Show and Saturday Night Live, students are able to confront the growing gap between the fabulous lives they see on Instagram and the bank account they need to pay for it all.

Volunteer presenters generally come to CARE from the bankruptcy community, where the program was first conceptualized. The volunteers are able to carry out thoughtful discussions because they have seen firsthand exactly what can go wrong when people abuse credit or make poor financial decisions.

“The CARE volunteers do this because they have a passion about financial education,” Flores said. “They give their time to help prevent the problem before bankruptcy is the only solution.”

A Lack of Financial Literacy Among Young Adults Led to CARE

After years of working for the New York bankruptcy courts, Judge John C. Ninfo II, noticed an alarming trend — many of the cases before him featured young adults who had found themselves drowning in credit card and student loan debt. Every day he saw new, distraught faces of folks whose poor, uneducated financial decisions had led them to his courtroom.

The worst news he had to deliver was that their student loan debt was not eligible for discharge during bankruptcy. While young adults are able to wipe out their credit card or other debts through bankruptcy, their student loans typically can not be cleared unless an extreme circumstance warrants it, which leaves them still struggling to make ends meet.

Ninfo recognized that the root of the problem was financial literacy — the young people in his courtroom didn’t know how to manage their finances. That’s when, in 2002, he created Credit Abuse Resistance Education as an outreach program for students. Soon after its inception, Judge Ninfo reached out to the American Bankruptcy Institute (ABI), of which he was a member, for help running the organization. Just last year, CARE was incorporated as a 501(c)(3) organization complete with its own board, funding, and volunteers. ABI still functions as a CARE affiliate and helps the nonprofit access more volunteers through the ABI member database.

Many program volunteers come from the world of bankruptcy — due to the ABI affiliation — and as such tend to be judges, lawyers, and even trustees who can speak from experience during CARE presentations. When it became a standalone organization, Flores — who recently made a new career move — was brought on as the executive director of CARE. Ninfo, now retired from bankruptcy court, still participates through a seat on the board.

Creating the Next Generation of Debt-Free Adults

By leveraging collaborations with the National Endowment for Financial Education, the JumpStart Coalition, and the LifeSmarts program, Flores said CARE plans to provide even more resources for students, parents, and educators.

Redman said CARE launched a brand new set of curricula in 2017 that its volunteers and anyone from the general public is welcome to use and build upon.

“The materials themselves were designed by a financial education consultant in conjunction with the financial educator serving on our board of directors, and a few former high school educators,” he said. “They’re really designed to make the most out of the hour that we get with our students every time we visit the classroom.”

Redman said the materials have also been translated into Spanish.

He said CARE is in the process of developing a new program to accompany the recent curriculum update.

As for the future, Redman said CARE is focusing on growing the program as much as possible.

“We’re currently in 37 states, Washington, DC, and Puerto Rico, and we are aiming to get to all 50,” he said. “We’ve actually had an explosion of program growth over the last few years. We’ve added about 20 chapters and about 15 new states in the last year and a half.”

He said CARE reached about 21,000 students in 2017 and the organization is looking forward to seeing that number continue to grow.