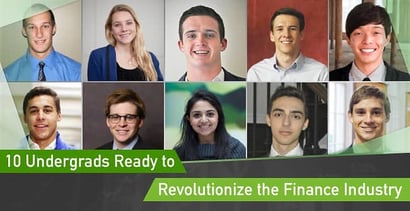 For thousands of college students around the United States, graduation is right around the corner. The days of juggling internships, exams and regular classes will soon be over, making way for exciting new careers and achievements.

Students majoring in finance and economics have a unique responsibility among their peers. Following graduation, they have the opportunity to apply their skills and become trailblazers in the global economy, whether it be managing assets, raising financial literacy or making credit more accessible to millions of people around the globe.

If you want to know what direction America is headed, you look at its youth today. If these 10 students are any indication, it seems as though our brightest days are still ahead. Hard-working, bold and full of ideas, these students are ready to tackle the finance industry and shape the U.S. economy in ways we’ve never seen before.

Now in her final undergraduate semester at George Washington University’s School of Business (GWSB), student Joanne Pronk’s experience will surely catch the eyes of future employers: Internships with the U.S. Department of Treasury and Goldman Sachs, Vice President of Finance for her university’s chapter of the Golden Key International Honour Society and winner of the both the 2011 GWSB Business Innovation Plan Project and the 2012 GWSB Organizational Behavior Case Competition.

Once she finishes her program next month, Pronk plans to earn an MBA with hopes of effectively leading and managing a business of her own one day — as well as raising a family and “seeing as much of the world as possible.”

The Financial Executives International Senior of the Year, Michael Kmiec became a rising star among his peers when he discovered the world of investment banking. His interests there led him to The Financial Markets Institute and studies in Security Analysis, which landed him a job helping manage a $5 million portfolio for the MSU Foundation. Somehow he still finds time to be President of Students Consulting for Non-Profits, a teaching assistant and a member of MSU’s Tower Guard community service organization.

Following graduation, Kmiec plans to pursue a career with as an investment banking analyst at J.P. Morgan, with the hopes of returning to Detroit one day “where I can leave a meaningful impact on the community.”

Some undergrads waste their undergrad years just coasting by, but not University of Alabama’s Zachary Adams. He’s already had internships with companies like Raymond James and J.P. Morgan and even used his data analysis skills to help build Books-a-Million’s mobile website. As its Chief Financial Officer, he helped lead Tuscaloosa’s local student-run non-profit Forza Financial, a microfinance lender empowering entrepreneurs in Tuscaloosa, Alabama.

Following his graduation, Adams will begin working as a Market Risk Analyst at Bank of America Merrill Lynch in New York, with hopes of becoming an asset manager and starting a non-profit small business consulting firm.

NYU’s Stern School of Business faculty selected Anika Advani in large part due to her impressive track record of leadership. She serves as the Chairwoman of NYU’s Stern Undergraduate Investment Analysis Group (IAG), where she oversees a team of 20 and helps manage a $30,000 portfolio. She is a Cohort Leadership Program Leader, an Orientation Leader and a member of the NYU Stern Judiciary Committee, honor society and the Beta Alpha Psi International Honor Organization for Financial Information Students and Professionals.

Advani’s internship experiences include working with Marcus & Millichap, C&A Consulting and Morgan Stanely. She’s already secured a full-time position with Barclays following graduation, where she will begin her career in investment banking.

Julian Marchese, 18, is only in his first year of college at NYU’s Stern School of Business, but he’s already busy running his own quantitative hedge fund named Remora, featured on the television show “Dragon’s Den” (or the Canadian version of “Shark Tank”) and is busy founding another named Marchese & Pigéon Investments. He also cofounded Leaders Investment Club, an international organization dedicated to promoting financial literacy among young adults.

Although he still has a few years left to complete his studies, he hopes to one day open up his businesses to the general public and become a successful and innovative fund manager.

A senior finance major at University of Georgia Terry College of Business, Wes Roberts is already head of several student organizations, including UGA’s Student-Managed Investment Fund, the UGA chapter of Blue Key National Honor Society and investing banking for the Corsair Society. He is also a Leonard Leadership Scholar, recipient of the Terry College Excellence in Finance Award, coordinator for UGA’s SMIF Stock Pitch Challenge and is a finalist for Terry College Alumni Board’s Student of the Year Award.

His ambitious goals include founding his own company one day, achieving fluency in another language, traveling to every continent and becoming a season ticket-holder for Georgia Bulldogs football. Following successful internships with the UGA Foundation, Stage 3 Enterprises, Citigroup and Credit Suisse, he will begin his career full-time with Credit Suisse this July.

School: University of Texas at Dallas

An honors student in University of Texas at Dallas’ Naveen Jindall School of Management (JSOM), Addison Kim is quite the world traveler: He co-authored and presented “Customer Service and Ethics in China and the USA” at the 2014 Cambridge Business and Economics Conference in the U.K. and was awarded the Global Experience Scholarship to study global business and German abroad at the Wirtschaftsuniversität Wien in Vienna, Austria.

He was also second place winner at the 2013 JSOM Business Idea Competition for his team’s proposal for an innovative academic planning app, winn of the First Annual Dean’s Cup and a committee head on the JSOM Dean’s Council. Following graduation, he will begin his career at the private equity firm Valesco Industries on their portfolio management team.

School: University of Texas at Dallas

JSOM senior Zachary Evans has been building valuable experience through his internships with wealth management firm Lee Financial and the Federal Reserve Bank of Dallas, where he was one of two candidates selected for the Dallas Fed’s Management Development Professional Program. He also won the first place prize at the 2013 JSM Business Idea Competition for proposing a silicone-based polymer for horse hoof protection.

While he’s looking forward to earning his MBA post-graduation, Evans would also like to cultivate his graphic design skills. “I have a passion for … all things aesthetic. Branding is incredibly powerful for any business,” he said. He hopes to use his skills to start his own marketing advisory firm and help develop new ideas to raise financial literacy in the United States.

Daniel Shine got his first taste of the finance industry as a member of Penn State’s Wall Street Boot Camp and has since moved on to internships as a financial analyst for Thomson Reuters and with UBS in their Portfolio & Planning group. And somehow he still finds time to keep a 4.0 GPA in his finance classes.

He’s accepted a position with UBS starting in 2015, working with their Wealth Management Invest Products. “I hope to have a successful career in wealth management and have a job where I can use my knowledge to increase people’s wealth and truly make a difference in their lives,” Shine said.

Eric Vishnevetsky is a Philadelphia native who has been interested in investing and money management since his early teens. During his time at Penn State, he’s held internships through UBS’ Wealth Management Americas Graduate Training Program and General Electric’s Financial Management and Freshman Finance Discovery Programs. He’s also a member of the Penn State’s Presidential Leadership Academy and was an analyst with the Penn State Investment Association.

Vishnevetsky hopes to both earn an MBA and become a CFA following graduation and looks forward to working with UBS in order to help “everyone learn to invest with trust, knowledge and simplicity.”

Do you want to get on these students’ level? Check your credit score today and get your own finances in order first.

Students, Getting Credit Has Never Been Easier!