Where to Find the Nation’s Best Math Education: 10 Cities Where Students Earn the Highest Test Scores in America 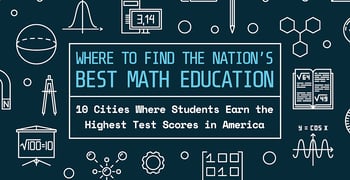 The United States has a math problem but it’s not the kind that can be solved with a simple formula or even an advanced algorithm. While math proficiency among elementary school students has generally trended upward in recent decades, data shows U.S. students are still trailing students in most of the industrialized world when it comes to math proficiency.

The 2015 Program for International Student Assessment (PISA) revealed Asian countries, including No. 1-ranked Singapore and No.2- ranked Hong Kong, dominated the top 10 highest average scores in math. The assessment, which is conducted every three years by the Organization for Economic Co-operation and Development (OECD), is an exam given to 15-year-olds in 72 countries across the globe.

The United States was on the bottom half of the list with an average score of 470 — 20 points below the overall OECD average.

Meanwhile, math is becoming more essential to the workforce within the U.S. In 1970, only 9% of jobs in the U.S. were considered to be technical positions, according to PBS. In recent years, technical jobs — which often require more than a basic understanding of mathematics — make up nearly one-third of U.S. employment opportunities.

With this in mind, we decided to take a look at the cities across the U.S. where public-school students are performing the best in math.

Below is a map that highlights the 10 cities where the National Assessment of Educational Progress (NAEP) found fourth- and eighth-grade students to have the highest average math scores in 2017 (the most recent data available). The NAEP compares schools across 27 urban districts in the country. The school districts were rated on a scale from zero to 500.

Hover over each jurisdiction to see its ranking.

The cities represented stretch from the East Coast to the West Coast, and across the South. Florida jurisdictions were well-represented, as were North Carolina and Texas. Keep reading to get the full scoop on the next generation of U.S. math hopefuls.

These numbers were down slightly from the 2015 NAEP report but are not significantly different from the 2003 NAEP report in which fourth-graders earned an average score of 242. Among Charlotte eighth-graders, 41% performed above the proficient level, and 71% performed above the basic level. The average NAEP score for these students was 287. While not a huge increase over time, eighth-graders did improve from the 2003 score of 279.

Charlotte, North Carolina, is our top-ranked city for math education in the U.S.

“We are pleased to be among the high scorers on the NAEP testing,” said Dr. Clayton Wilcox, superintendent of Charlotte-Mecklenburg Schools in a press release. “But we are not satisfied with the overall results. As is the case nationally, fewer than half of our students are demonstrating proficiency in core subjects — and that’s not enough.”

Students in Austin, Texas, came in with the second-highest NAEP numbers in the U.S. Fourth-grade students in the Texas capital saw an average NAEP score of 243. With 44% of students performing at or above the proficient level, Austin students trailed Charlotte students by two percentage points. And 81% performed at or above the basic level.

The high average NAEP scores from fourth-graders and eighth-graders in Austin put the Texas city in second place for best math education.

Austin is home to the No. 1 public high school in Texas, according to Niche.com. The website explores large data sets and combines its findings with user reviews to rate schools, colleges, and neighborhoods. Niche.com gave the Liberal Arts & Science Academy, located in the Austin Independent School District, an A+.

Up next on our list of cities with the nation’s best math education is San Diego, California. The Southern California city contains the only West Coast schools included in the top-10 list. San Diego fourth-grade students averaged a score of 237, according to NAEP. The percentage of fourth-graders performing at or above the proficient level was 37%. And the percentage performing at or above the basic level was 76%.

Eighth-grade students in San Diego earned an average NAEP score of 283. Some 36% of students performed at or above the proficient level, slightly below Austin eighth-graders. But they tied Austin with 68% performing at or above the basic level.

In the No. 3 spot, San Diego is the only West Coast city represented in our list of the top 10 cities for best math education.

“San Diego Unified is the only large urban district in the nation to register significant test score increases compared with 2015 in both reading and mathematics in fourth grade, with notable gains made by students eligible for subsidized meals,” according to a press release.

Jacksonville eighth-graders fell slightly below our top-three-ranked cities with an average NAEP score of 275, which was the same average score the students received in 2015.

Florida boasts three districts on our list, and Duval County was the top Sunshine State district and No. 4 overall in the nation.

“Duval tops the list of urban school districts in student achievement,” according to a press release from the Jacksonville Public Education Fund. “Duval’s fourth-grade students ranked No. 1 on the math assessment (49% scored at or above proficient), surpassing the other 26 school districts who participate in NAEP’s Trial Urban District Assessment (TUDA) program.”

These numbers topped the averages for public schools in large cities. Guilford County eighth-graders had an average NAEP score of 276, also above the national average for large cities. 2017 was the first year Guilford County participated in NAEP testing so there are no previous years to compare its numbers.

Located about 90 miles northeast from the No. 1 ranked city of Charlotte, Guilford County, North Carolina, came in at No. 5 on our list.

Guilford County Schools Superintendent Sharon L. Contreras touted the value of students taking the NAEP assessments. “Results from these assessments will be invaluable as we work toward our strategic plan goals. Going forward, we can more specifically identify areas needing attention or improvement,” Contreras said. “In addition, we can measure ourselves against other districts comparable to demographics and size.”

Rounding out the Florida entries on our list is Hillsborough County, home of Tampa, a major city on the state’s west coast. Hillsborough County Public Schools fourth-grade students received an average NAEP score of 245, which is 12 points higher than the average score of 232 for public school students in large cities.

Finally, on Florida’s west coast, Hillsborough County came in at No. 6 on our list.

“Florida students have again outpaced their peers and have demonstrated once again that our states’ commitment to providing a high quality public education for each student has paid dividends,” said then Florida Gov. Rick Scott in a press release. “A large part of today’s success comes from a commitment from Florida taxpayers to continue to invest in Florida schools.”

The expansive Miami-Dade County district in Florida ranked No. 7 for best math education.

“Miami-Dade County Public Schools’ students continue to surpass the nation on standardized assessments, including NAEP-TUDA,” said Miami-Dade County Public Schools Superintendent Alberto Carvalho. “Miami-Dade’s results for what is widely considered the Nation’s Report Card, suggests that academic standards, instructional rigor, and student achievement continue to move on an upward trend in our school district. This is an impressive achievement that our School Board, students, teachers, employees, and the entire community can celebrate.”

Moving to the northernmost district represented on our list, Boston schools ranked No. 8 for the nation’s best math education. Fourth-graders in the Boston Public Schools district had an average NAEP score of 233, and 31% of the students performed at or above the proficient level. Almost three-quarters — 74% — of the fourth-graders performed at or above the basic level.

“We have a lot of good news to celebrate with the results of these scores,” said Boston Public Schools Superintendent Tommy Chang. “At the same time, there is much work to be done to close the opportunity and achievement gaps. BPS will work tirelessly to ensure that all students have an equal opportunity to succeed in college, career, and life.”

Coming in ninth on our list is Jefferson County, Kentucky — best known as the home to Louisville. Jefferson County Public Schools’ fourth-grade students earned an average NAEP score of 233, one point above the public school large-city average score.

Jefferson County, Kentucky — home to Louisville, the state’s most populous city — ranked No. 9 for the best math education.

As with other districts that finished among the top schools, Jefferson County Public School officials were pleased to have scored high relative to other districts but expressed concern that the numbers should be higher in general. By the time the scores were announced, Jefferson County Public School Superintendent Dr. Marty Pollio already had plans in place to make reforms and improvements that will lead to improved test scores in the future.

Houston eighth-grade students earned an average NAEP score of 273, which is one point below the national average for large cities. But the average of 24% performing at or above the proficient level was double the percentage observed performing at the same level in 2003. And 60% performed at or above the basic level.

Houston — the fourth most populous city in the country — closed out our list as the 10th-best district for math education in the country.

“The NAEP remains an important measure of outcomes achieved by Texas students and helps identify areas where we can improve,” Texas Education Agency Commissioner Mike Morath said, according to the Houston Chronicle. “Results for 2017 show that our African-American, Hispanic and white students perform in the top 10 of all states in mathematics, but reading results are lagging, as are overall averages.”

To compile this list, we explored data released by the National Assessment of Educational Progress for testing in 2017, 2015, and earlier, when applicable. The rankings were determined by looking at the NAEP scores and achievement levels of fourth-grade and eighth-grade students in school districts that participated in the NAEP assessment. The focus area was math scores for public school students in large cities. NAEP administers the exam every two years and is “the largest ongoing assessment of what U.S. students know and can do,” according to the organization.