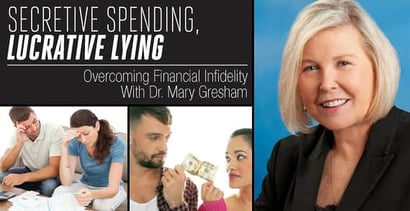 Ashley has managed content initiatives for BadCredit since 2015, having worked closely with the world’s largest banks and financial institutions, as well as press and news outlets, to publish comprehensive content. Her credit card commentary is featured on national media outlets, including CNBC, MarketWatch, Investopedia, and Reader's Digest.

When someone in a relationship commits an act of infidelity, the rational assumption is someone cheated on their significant other with another person. But there’s another kind of infidelity, stemmed from one of the most significant causes of divorce, according to Dr. Mary Gresham. Financial infidelity is when your spouse cheats on you with money.

Money is the Leading Cause of Marital Arguments

Gresham, who specializes in financial psychology and financial therapy, said money is the number one thing couples fight about, alongside parenting and sex.

According to the 2014 American Psychological Association (APA) Stress in America Survey, nearly a third of couples reported that money is a major source of conflict within their relationship.

“Money is the symbolic conflict about power and status in the relationship,” Gresham said. “Financial infidelity occurs when a couple has separate and non-transparent finances.”

It’s becoming increasingly common for couples today to not merge their finances, even when married. This leads to couples operating as two individuals, instead of a “money team,” said Gresham. This can result in lies about secret spending, hidden income, and in severe cases, debts that become the betrayed partner’s problem. Distrust in the relationship ensues and problems arise.

According to the APA, many couples discuss their views of marriage, children, and where they want to work and live, but they fail to mention their financial beliefs and goals.

However, it’s never too late to have this discussion and work toward these goals as a team. When you are able to communicate and understand your partner’s perspective, you lessen the risk of financial infidelity.

Discussing finances with your spouse can prevent financial disasters.

Financial infidelity can mean a range of things. It can mean lying about income or hiding a purchase from your significant other because you believe they’ll disapprove, which a third of people in relationships admit to doing. It can be something as severe as gambling or high-risk investment debts, which Gresham said men are more likely to commit.

Any hidden finances or lies about spending with the knowledge that it is against your spouse’s wishes is detrimental to the health of the relationship and an act of financial infidelity.

Financial Infidelity Can Make or Break a Relationship

Gresham has treated many couples who’ve experienced financial infidelity and said she’s seen it destroy marriages, but she’s also seen it improve marriages by overcoming the marital crisis together.

“You can use it to change the dynamics of the relationship and improve the marriage that you have, or you can let it destroy it,” she said.

To overcome financial infidelity, Gresham advises the first step is to commit to full transparency going forward. That means revealing passwords to accounts and no more secrets, but it’s also important for the partner who was betrayed to not act out on any anger they’re harboring to prevent the situation from escalating and to understand that this is a two-person problem.

Sometimes financial infidelity occurs because one person feels controlled by their partner. Take into consideration what made your relationship vulnerable to the indiscretion. Gresham always asks couples she works with whether this is a problem one partner has always had, a problem that’s just come up in the marriage, or a result of relationship dynamic.

Take Responsibility and Move On, Together

Ultimately, the person who did the deed needs to accept responsibility for their actions and pledge to work as a team to devise a plan to prevent future instances and how to conquer the newly accrued debt.

Set a “money transparency date” where both parties lay it all out: pull credit card statements, credit reports, 401(k) statements, and provide passwords to accounts. Make a plan the betrayed partner can tolerate in terms of being part of the repayment or recovery plan. Have regular money dates and continue to work toward your goals as a money team instead of two individuals.

While a money transparency date may not sound thrilling, there are ways for couples to make it fun. Plan to do something together afterward that is within budget, which will also help you reconnect. Schedule these dates regularly on the same day each month so it becomes routine, and don’t forget to celebrate goals as they’re achieved.

Overcoming financial infidelity is possible as long as both parties are willing to work together to accomplish the same goal, reestablish trust, and let go of resentment.

How to Overdraft Your Debit Card