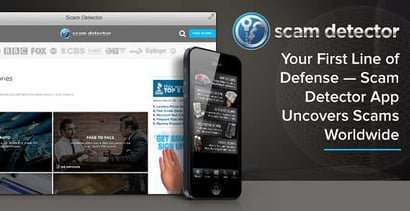 Amber Brooks is a longtime lifestyle editor and blogger who has authored thousands of articles on topics ranging from debt consolidation apps to budget-friendly date ideas. With a background in writing, she's uniquely suited to diluting complex financial jargon into terms that are easily understood. When not obsessively budgeting out her days, Amber can often be found with her nose in a book.

In a Nutshell: Scam Detector is a website that offers the largest list of scams active all over the world. This easy-to-use tool raises consumer awareness about the various lies and frauds that often fool people into giving away their money or personal information. Scam Detector fights back against scammers, arming victims with knowledge to prevent a financial nightmare. To the site’s creator, Sorin Mihailovici, this is a deeply personal undertaking inspired by the experiences of a close friend.

Hollywood movies often depict scams as a dramatic plot twist filled with intrigue and suspense. A clever con artist cheats some dupe, and the audience applauds, safe in the knowledge that it’s all just harmless fiction.

On its surface, the docu-drama “419: The Nigerian Scam” appears to be just another movie about a scam. The story is familiar: An average family man loses his life’s savings to an unbelievably intricate lie. Nigeria’s billion-dollar-scam industry gets the best of this man, who’s just one of hundreds of thousands conned every year. It’s a lurid plotline, however, this film isn’t a work of fiction.

Sorin Mihailovici, director of “419: The Nigerian Scam” and creator of the Scam Detector website, knows that this story is all too true.

He is intimately aware of the cost that scams can have on unsuspecting people. For Sorin, Scam Detector is more than a website — it’s a personal cause to stop scammers and protect potential victims.

“We expose the world’s more notorious scams and educate consumers on how the scams work and what to do to avoid them.”

Scam Detector’s website can be accessed via desktop or mobile phone.

After Sorin’s friend fell prey to Nigerian internet scammers in 2007, he became depressed, blaming himself and feeling hopeless. He didn’t tell anyone what had happened to him.

Finally Sorin confronted his friend about his sullen behavior, and the truth came out. “He said it was better scripted than some Hollywood movies,” Sorin recalls. The Nigerian scammers had created a detailed lie, even flying Sorin’s friend to Amsterdam as part of the scam. He was so deep in that he never thought it was all a hoax until his money was gone.

A filmmaking student at the time, Sorin decided to produce a short independent film that showed how this Nigerian scam works and how it ruins lives. He actually wrote, directed, and starred in the re-enactment.

“419: The Nigerian Scam” found widespread success, premiering at the West Hollywood International Film Festival. The website alone boasted over a million views. Even years later, there were still comments being posted, and one passing remark from an anonymous commenter provided the inspiration to build Scam Detector.

“One day in 2011, somebody said ‘I wish there was an app that’d expose not just one scam but all of them.’” A lightbulb went off and Sorin realized, “I think I could do that!”

Now Scam Detector is a groundbreaking website that compiles together scams from all over the world. Active in almost every country, this completely free service provides easy search tools for scams in different sectors, including Finance, Auto, Travel, Social Network, Employment, Telephone, Face-to-Face, and more.

A Proactive Approach Keeps You From Becoming a Victim

Scam Detector is the largest fraud-prevention database of its kind. To create such a comprehensive list takes a lot of dedication, with a team of individuals working tirelessly to find what scams are out there.

“We started with 300 scams in all industries, from financial to travel, from auto to employment,” Sorin tells us, “and now we’re almost at 1,000 scams exposed.”

The Scam Detector website, in particular, has enjoyed much popularity with nearly 300,000 unique views per month. Sorin estimates that this in-depth list of scams brings increased awareness to over three million people every year.

Using simply worded descriptions, Sorin documents scams so that people better understand how they work. Each scam’s outline comes complete with what the scam entails and how to avoid it. Proactive against scammers, the list arms consumers with knowledge so that they won’t be easily tricked out of their hard-earned money.

Sorin’s help doesn’t stop at mere prevention though. On the reactive side, Scam Detector values its partnership with the Federal Trade Commission and the Better Business Bureau. If it’s too late for prevention, victims will be directed to these credible places where they can get help dealing with the fallout of a scam.

If Scam Detector doesn’t have the resources to help you, they’ll direct you to an agency that does.

Putting Knowledge in Your Hands

Scam Detector’s wealth of information is always available to keep you from falling for the manipulative tactics of bad people.

The website is managed by an experienced team who knows how to track down the latest scams out there. Their list of scams is frequently updated and constantly growing as scammers come up with new ways to hoodwink innocent victims.

“We have alerts,” Sorin explains, “We’re being alerted by every single newspaper article that’s written anywhere in the world when it comes to any scams. We have police reports that are coming to us, we have newsletters from law enforcement organization that come to us. Plus we’re doing an active search online.”

On the website, scams are categorized so that users can easily browse by topic.

In the financial category, you can sift through a variety of ruses targeting the money or personal information of unsuspecting victims. For people with bad credit, guaranteed loan scams are a common ploy.

According to Scam Detector, prevalent strategies include demanding upfront fees or application fees in order to get a loan. People pay because they believe these scammers are the only ones who will take a chance on them and give them a loan.

“High-pressure tactics, a lot of guarantees thrown around, and additional advantages,” Sorin says. “These are basically the hooks that cast victims into the scammer’s net, because people with bad credit are desperate.”

Guaranteed loan scams are just one example in a long list of about seventy financial scams currently described on the website. This database is always growing in order to keep up with the latest scams and ensure that its readers are well-informed.

Facing off against vast scam networks all around the world, Scam Detector uncovers fraudsters and hoaxes in a variety of areas from finance to travel.

Rather than staying a helpless witness to these crimes, Sorin took action and created a solution. Via desktop or mobile phone, Scam Detector is available for free to anyone who wants to fact check a claim or search out possible dangers.

Before taking out a loan, sending money to a stranger, or giving away your personal information to a voice on the phone, conduct a quick search at Scam Detector. You might just find your situation described to you in exact detail. With simple research tools, the website encourages you to be safe and stay smart.

This work is gratifying for Sorin. “I have readers from Burundi; I have people thanking me from Laos,” he says. “I feel very thankful because we get all these messages saying ‘Thank you’ almost every day.”

Scammers prey on ignorance, but they can’t fool you if you know what to look out for. As a comprehensive and protective resource, Scam Detector gives consumers greater peace of mind.

Amber Brooks
Amber Brooks is a longtime lifestyle editor and blogger who has authored thousands of articles on topics ranging from debt consolidation apps to budget-friendly date ideas. With a background in writing, she's uniquely suited to diluting complex financial jargon into terms that are easily understood. When not obsessively budgeting out her days, Amber can often be found with her nose in a book.
1.8k followers
6.6k followers
◄ 1 of 5 ►