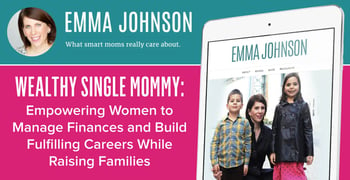 In a Nutshell: Separating from a partner is difficult, especially when children are involved. Emma Johnson, who is among the nearly 10 million American families run by a single mom, provides valuable resources on Wealthy Single Mommy to empower single moms to take control of their finances and careers to lead fruitful, happy lives. We spoke with Johnson about some of the challenges single moms face and gained some insider knowledge on how to overcome them. Johnson said money is the top issue single mothers face today and that women should focus intently on separating their finances from those of their former partners to gain financial independence. In addition to the Wealthy Single Mommy blog, Johnson has cultivated a rich online community and has written two books on thriving as a single mother.

Life is full of twists and turns — a fact that Emma Johnson is well aware of.

Johnson was married and living a comfortable life when her husband fell off a cliff during a work trip to Greece and sustained a serious brain injury. And although he survived, when he came home following his recovery, his personality was not the same. Johnson said that, like many couples, they fought before the accident, but after his injury, his anger became unbearable.

With their second child on the way, the couple split up and Johnson found herself at the precipice of a whole new, unexpected, and unknown life.

Emma Johnson is the Founder of the Wealthy Single Mommy blog.

Johnson buckled in for this big, unnerving twist in her life and wondered how she was going to raise two children, support them financially, and live her own fulfilling life.

“It started seven years ago and it was really very much a personal story,” Johnson said. “I was speaking to other professional single moms because I felt like there wasn’t any real voice out there speaking to me and my friends, and having the conversations we were having.”

Before she knew it, Johnson realized that her hunch was correct and the blog took off.

“Immediately after launching in 2012, tens of thousands of women every month started visiting, commenting and connecting on Wealthysinglemommy.com,” according to Johnson’s website. “The media started calling. Something special was going on.”

Over the years, Johnson has expanded her blog into a website that is the hub for all things related to Wealthy Single Mommy — blog, podcasts, links to her two books, a Facebook group, and other resources for her audience.

We recently spoke with Johnson about the challenges single mothers face today and how they can meet those challenges head-on to be independent, successful women while raising well-rounded families.

Money is the Primary Challenge for Single Moms

Johnson pointed out that although her personal experience as a single mom was borne out of divorce, that’s not the case for many women today. Societal trends are changing and single mothers come from a wide variety of situations.

“The majority of young, millennial moms are not married,” she said. “Maybe they’re going through a breakup or were a single mom from the start. The traditional nuclear family is not what families look like anymore.”

But she said regardless of how they came into single motherhood, they face many of the same hurdles on the road ahead.

“Preparing for a new start as a single mom is terrifying because no matter what, you are probably going to be poor in the short term,” Johnson said. “Money is the number one challenge for single moms.”

She said single moms must take into account everyday financial and logistical questions like how to pay rent, figuring out childcare options, and how they are going to grow their careers. And oftentimes, they are dealing with heavy emotional stress and societal expectations as well.

While today’s society has made great strides toward gender equality, in general, and acceptance of different types of families, Johnson said there’s still an overwhelming presumption that a single mother will always be broke, struggling and lonely, and that her children will be lacking in some way.

“I hope I can help moms get over those presumptions and realize things like, ‘Wow, I am now free from this bad relationship that was holding me back. I don’t have to run professional and financial decisions through a partner who wasn’t supportive. I don’t have to manage somebody else’s gambling habit or shopping addiction,’” she said.

Money is the number one issue that couples fight about, Johnson said, and once women are on their own, they can funnel that energy into their own projects, like starting a business or growing their career.

And it’s important to understand that it may take time to achieve all your goals as a single mom, she said. In the meantime, it’s important to maintain a lifestyle that is in line with how much money you earn.

“You don’t need a big house. You might not love it, but it’s temporary,” she said. “You’re not entitled to some nice lifestyle just because, once upon a time, you were attractive to a high-earning man who paid for a big house.”

Johnson said women should focus on paying down any debt, saving money, and focusing on earning and building a career.

Disconnecting from Your Ex’s Finances

In addition to learning to live on one income and aligning their lifestyles with that income, Johnson advises single mothers not to pursue alimony payments.

“Child support could be a huge part of your financial story, and I really urge women to question that,” she said. “We come out of relationships, and the collective message from friends, family, lawyers, our culture is that women should get all the money you can out of the guy.”

Johnson expanded her philosophy into book form with “The Kickass Single Mom” in 2017.

This is especially true if the man was responsible for treating the woman poorly, cheated on her, or abused her. But Johnson said there is no such thing as free money — alimony payments come with a burden.

A child support battle can lead to a lot of negative energy and toxic situations, she said. In the end, it’s not worth the fight.

“You’re probably not even going to get it,” she said. “Only 40% of child support owed is actually paid. So what are you going to do? You’re going to spend all your time, energy and lawyer fees fighting for money you’re never going to get.”

Johnson added that the average amount of child support ordered by the courts is less than $400 a month.

“What if you just took all that energy and just earned?” she asked. “Let it go, and let him go because, when you’re fighting with him, you’re holding on to a relationship that’s over. Cut the cord and spend the energy on your own personal development. We should all be taking care of ourselves.”

A Community of Single Mothers Supporting Each Other

“Wealthy Single Mommy is kind of ground zero for all the different outlets, like my podcast and social media,” Johnson said. “There are so many overlaps because people consume content in different ways.”

Johnson’s Facebook group, Millionaire Single Mom, is certainly one of the most engaging platforms for the community of single mothers that has sprung up around Wealthy Single Mommy.

The closed group currently has almost 14,000 members and remains active on a daily basis with multiple administrators overseeing the group. (Johnson has a total of 70,000 social media followers across platforms and accounts.)

On her “Like a Mother” podcast, Johnson discusses money, careers, relationships, love, and more with celebrities, advocates, and everyday people.

“It’s a way that women can directly connect with each other,” Johnson said. “I have beautiful messages from women saying how the group has changed their lives just by being around other women in a similar situation.”

But don’t try to gain access to the group unless you are truly a single mom — married women with lazy or otherwise checked out husbands need not apply.

“Ladies, if your husband is away on a hunting trip for a weekend, you are not a single mom,” Johnson wrote on her blog. “Or even, as Michelle Obama accidentally did, you call yourself a single mom because your husband is really, really busy with his fabulous career, you are out.”

Johnson also engages single moms through her podcast, “Like a Mother,” where she discusses careers, money, parenting, feminism, sex, love, and relationships with celebrity guests, advocates, and everyday people.

Johnson has been dividing her time lately between Wealthy Single Mommy and her new activist organization, Moms for Shared Parenting.

“Our mission is to promote equally shared parenting, with a focus on what is best for children, while simultaneously closing the gender pay gap,” according to the website, which contains valuable information about how to approach shared parenting and how people can get involved to support the movement.

Johnson said 56 peer-reviewed studies have shown that kids benefit the most from spending equal time with both parents.

“I’m really passionate about the shared parenting thing,” she said. “It is really truly getting at the root of gender equality. Only good things can come about when we have men equally caring for kids and women equally participating in the workforce.”