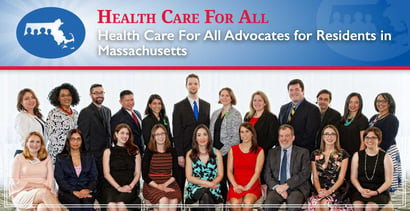 In a Nutshell: The Boston-based nonprofit Health Care For All has been advocating for adequate health coverage for all Massachusetts residents since the mid-1980s. The organization has influenced health care policies on the state and national level. Today, it works with coalitions and policymakers to continually improve health care access in Massachusetts. And its Health Care HelpLine provides residents with direct access to valuable advice about how to gain coverage. The group is also advocating to lower exorbitant prescription drug prices. Health Care For All’s original Executive Director, Rob Restuccia, passed away recently, but the organization remains inspired by his collaborative vision to improve the lives of Massachusetts residents.

In the mid-1980s, a troubling trend called patient dumping was increasing in large cities in the U.S. Some hospitals would “dump” indigent or low-income patients at state-run health care facilities because the patients couldn’t afford to pay for medical services.

A coalition called Health Care For All (HCFA) was formed in Boston in 1985 to help combat the issue in the Massachusetts capital.

The ideas and momentum that emerged from that grassroots coalition would eventually lead to health care policies that were enacted on a national stage.

“In 1988, the coalition advocated for a state universal health care law,” said María R. González Albuixech, HCFA’s Strategy and Communications Director. “Although that law was never fully implemented, it laid the groundwork for statewide health care reform in 2006.”

That 2006 reform would serve as one of the models for 2010’s Affordable Care Act. Additionally, Health Care For All — which was incorporated as a nonprofit in 1989 — was instrumental in advocating for the passage of the Children’s Health Insurance Program (CHIP).

A clear trend began to emerge, González Albuixech said — when Massachusetts established a health care standard, some version of it eventually expanded to the national level.

Despite public health program improvements in Massachusetts and on the national level, unexpected medical expenses or ongoing health care costs can still cause detrimental effects to a family. The added financial burden for a family on a budget can increase stress among family members and lead to negative health consequences, evictions and childhood trauma.

Those are just a few of the reasons Health Care For All remains extremely active in Massachusetts.

“Our vision is for everyone in Massachusetts to have the equitable, affordable, and comprehensive care they need to be healthy,” González Albuixech said.

She said the organization’s goals are realized through its mission statement: “Health Care For All advocates for health justice in Massachusetts by working to promote health equity and ensure coverage and access for all.”

Health Care For All works to implement its mission on a daily basis through extensive work with coalitions and its Health Insurance HelpLine.

The 2006 state reform greatly improved the level of health coverage in Massachusetts, González Albuixech said, but there is still work to be done.

“Currently about 97% of the population has been covered,” she said. “That’s a high number, but there are parts of the population we haven’t reached yet. And some people come in and out of coverage, while others who are covered may be underinsured.”

Since the mid-1980s, Health Care For All has been working to ensure adequate health coverage for every Massachusetts resident.

The organization works very closely with policymakers on a regular basis to reach these populations, she said. “We’re all in this together — all the stakeholders value the culture of coverage. In Massachusetts, pretty much everyone in the state — providers, insurers, consumer advocates — we all see ourselves as a piece of the puzzle and value access to care.”

The Health Insurance HelpLine is a free resource available to anyone in Massachusetts.

González Albuixech said the toll-free line is open from 9 a.m. to 5 p.m. Monday through Friday and counselors are available in English, Spanish, and Portuguese.

“The HelpLine is there to assist individuals who are applying for health insurance,” she said. “Not only are we able to provide assistance, but it gives us the chance to hear from people on the ground. We can learn where glitches are to people getting the care they need.”

González Albuixech said Health Care For All will take issues raised on the HelpLine to a policy team to determine if the issues are systemic or a one-off problem.

“We try to determine if it’s something that can be fixed immediately, and, if not, what might be the best way to bring about the needed change,” she said. “We determine whether it can be best addressed through the budgeting process, policies, or conversations with the executive branch, to name a few.”

Health Care For All takes up a wide variety of important initiatives on behalf of Massachusetts residents. The organization formed the Massachusetts Prescription Reform Coalition (MPRC) in 2008 to address the high price of prescription drugs.

The coalition was successful in its early goal to ensure the passage of Chapter 305, which restricted marketing efforts around prescription drugs, a practice that drives up health care costs. Yet prescription drug prices have continued to rise due to the hazy practices around drug prices and incentives to prescribe particular drugs.

Health Care For All is currently advocating for policies that address the increasingly high cost of prescription drugs.

The Washington Post reported that drug prices rose an average of 57% between 2006 and 2014. And drugs with no generic equivalent rose 142%.

Recently, González Albuixech said Health Care For All has again been working diligently to address the problem of prescription drug prices that are prohibitive to populations that need them.

“The 2014 Massachusetts Health Care Cost Trends report found that drug spending is growing faster than any other category of health care spending,” according to the Health Care For All website. “These rising costs threaten the stability of health care reform and the Commonwealth’s budget.”

Additionally, the high costs threaten citizens’ ability to access medications they need that are essential to maintaining their health.

Health Care For All is trying to do its part at the state level to find solutions that will lead to more affordable prices for prescription drugs, González Albuixech said.

“We’re very grateful for the innovations in prescription drugs over the years but at the same time, if people can’t afford to buy them, there’s no point,” she said.

From Health Care For All’s early days as a coalition to 2006’s Massachusetts health care reform, Rob Restuccia was always there. Restuccia served as Health Care For All’s Executive Director from 1989 to 2003. He remained closely involved with the nonprofit even as he took on the role of Executive Director for the national organization, Community Catalyst.

Unfortunately, Restuccia passed away in early 2019 following a battle with pancreatic cancer.

“Even though Rob Restuccia was no longer the Executive Director for Health Care For All, he was a leader to all of us,” González Albuixech said. “We would absolutely not be where we are today without his visionary leadership.”

She said Restuccia’s collaborative approach to realizing health care reform for Massachusetts and the U.S. has guided how Health Care For All functions and has helped ensure its success. And he made sure he instilled his vision and drive in the next generation of leaders.

Despite the important impacts Restuccia made over the years, González Albuixech said he was never one to take credit for the work himself.

He saw it all as being for the good of the movement. Nevertheless, in his passing, multiple publications have heralded him as the father of health reform.

“Rob’s departure leaves an enormous hole in the consumer health care advocacy movement,” said Amy Rosenthal, a long-time mentee of Restuccia and current Executive Director of Health Care For All. “Rob taught all of us that it is our responsibility to train the next generation of health care leaders, and the consumer health care advocacy movement exists today because of him. This movement will continue to thrive as a legacy to him and his incredible passion.”

González Albuixech said that Health Care For All is constantly working on a number of focused initiatives to improve health care access for specific populations or enhance existing coverage. Two other initiatives that have been at the heart of the nonprofit’s work recently are children’s health care and oral health.

The organization’s Children’s Health Access Coalition has helped 98% of children in Massachusetts receive coverage, but Health Care For All’s work is not done until all children are covered.

And, because “the mouth is the door to the rest of the body,” González Albuixech said a significant effort in the nonprofit group’s work in oral health is to see that oral health be covered under regular health care.

Health Care For All’s track record and vast influence it has had in health care coverage over the years instill confidence that its latest goals will eventually be met as well.