Want to Really Repair Your Credit? Lawyer Up. 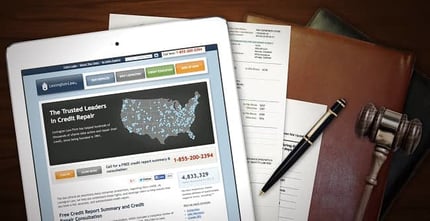 On the list of things people enjoy doing, repairing their credit probably ranks pretty low. It’s a long and delicate process fraught with legal pitfalls. Managing your credit profile is hard enough, let alone trying to understand the complex laws that govern it.

Even with laws like the Fair Credit Reporting Act on the books, credit reporting bureaus, lending institutions, merchants and debt collectors still make mistakes every day. In fact, a 2013 government study showed upwards of 40 million people have errors on their credit reports.

You’re entirely within your legal right to dispute errors on your credit report, but if you have terrible credit, chances are you don’t have the time and legal knowledge to perform your own credit repair.

That’s when it’s time to lawyer up. We spoke with a consumer advocate with credit repair firm Lexington Law, to find out why it pays to have a paralegal in your corner during the credit repair process.

Lexington Law began practicing consumer law in the early 1990s. According to a representative of the firm, the credit repair landscape was “pretty dismal” at the time.

“Consumers found themselves confronting problematic credit reports with no real integrity-based solutions in sight,” the advocate said. “Credit reports were practically incomprehensible… It was impossible.”

At the time, so-called “credit repair” companies had unusual and unethical solutions to bad credit. For example, a firm might’ve encouraged you to lie to your credit bureaus, withhold payments from creditors or create a new identity altogether, according to Lexington Law

“With such an unethical landscape, we saw a need that consumers had to be able to confront problems with credit reports and understand them, and a need to be able to do credit repair in ways that were ethical and efficacious,” the advocate said.

When consumers agree to work with Lexington Law, the company matches them with paralegals who specialize in consumer credit law and carefully review the client’s credit reports from Experian, Transunion and Equifax.

The paralegal will then isolate each negative mark on the reports and determine whether all applicable laws are being followed. The paralegal then works with the client to draft the appropriate correspondence.

“We’d say, ‘demonstrate that this item met the three standards — not one, but three — for fairness, accuracy and substantiation,'” the advocate said. “So many other credit repair organizations only live in the land of accuracy, which then forces them to have simplified conversations.”

In terms of communications with credit bureaus, Lexington Law said only six percent are “actual disputes,” with the rest focused on verifying questionable and negative items.

Many credit repair firms resort to a dispute-heavy way of doing business, often resorting to what’s known as “jamming,” a technique that tries to game the 30-day response requirement imposed on credit bureaus by the Fair Credit Reporting Act.

A trained consumer credit paralegal could help you discover rights you never knew you had.

For example, charged off accounts tend to generate one or more errors on credit reports. The original creditor will typically sell that debt to a third-party debt collector, who could then charge the debt off again and sell it to yet another collector (or may ultimately do the same).

“So now you have three trade loans on your credit report, making you look like a serial dead beat, when in fact only one probably belongs there,” the advocate said. “That’s not the most positive story, but it’s certainly a far, far better story than the one that typically appears on consumer credit reports… it’s technically accurate, but unfairly reported.”

In addition, consumers frequently have the misconception that reporting entities (lenders, merchants, etc.) are required to report negative activity to the credit bureaus — but really, there’s no law requiring them to do so.

“Our job is to ask tough questions for consumers with data furnishers and the credit bureaus, in order to help them improve their scores and credit reports.”

Likewise, although defaults and bankruptcies can stay on your report for 7 to 10 years, that’s the maximum — not the minimum — that they will appear on the report. There is no minimum length of time for negative entries.

You don’t need a lawyer to be able to ask these questions, but you might not get the results you need without one.

The most effective way to improve a credit score

Generally we advise our readers to keep their debt-to-credit ratios low, pay their monthly bills on time and demonstrate similar habits of responsible financial behavior if they want to raise their credit score.

However, actually removing negative items from a credit report is, by and large, the fastest and most effective way to raise a credit score.

If you can make that happen, more power to you. However, you may have to worry about reinsertions (having the same negative marks removed only to reappear later) if you go about credit repair the wrong way.

“Past clients who have stayed at our firm for seven months have seen about 60 percent of their questionable items removed,” the advocate said. “We see very few reinsertions because we’re repairing credit the right way — in a more nuanced way, in a more statutorily-based way. That’s our competitive difference at Lexington Law Firm.”

You can find more information about Lexington Law on our credit repair reviews page.

When Should You Use a Credit Repair Agency?

Which Credit Repair Agencies are the Best?