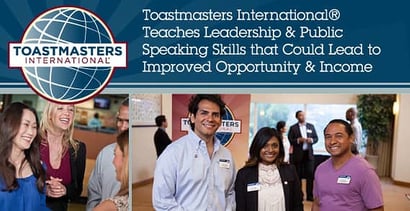 In a Nutshell: Joining a club that teaches public-speaking skills probably isn’t the first thing that pops into your head when you’re brainstorming ways to boost your job opportunities and earning potential. But for more than 90 years, Toastmasters International has helped thousands of individuals ace job interviews and achieve incredible levels of professional and personal growth. Through weekly club meetings and multiple educational programs, Toastmasters teaches its members communication, confidence, and leadership skills that can propel their careers and financial prospects to new heights.

When people are asked to name their greatest fear, one would think terrorism, global warming, or cancer would be the most common answer. However, numerous surveys have shown that the number one fear for many people is much more innocuous — public speaking.

The fear of public speaking, or glossophobia, is something that many people live with, but few actually take the time to do anything about. This is unfortunate, as improving one’s communication skills can have a number of important benefits, not only in terms of instilling courage, but also for enhancing one’s career opportunities and earning potential.

Matt Peterworth knows firsthand how important public speaking skills are to career success — and he credits his college Toastmasters International club for helping him overcome his glossophobia and ultimately land his dream job.

As a new student at Kansas State University, Matt was terrified of public speaking, but he was determined to conquer this fear, so he joined the university’s Toastmasters group. As a member, he was able to hone his communication skills to the point where, after graduating, he regularly volunteered to give speeches at national conferences related to his field of study in information technology.

Matt would go on to speak before audiences as large as 1,500 people, and this experience directly led to him being hired as project manager for information technology services at the University of Texas in Austin.

“I recently learned that when my current boss considered hiring me, he saw that I had spoken at these conferences, which helped distinguish me from the other candidates,” Matt told Toastmaster magazine. “Had I not been a part of Toastmasters, I wouldn’t have challenged myself to be the public speaker that I am today. And I might not have my dream job.”

Since 1924, Toastmasters International has helped people like Matt improve their public speaking, communication, and leadership skills. Toastmasters is a nonprofit educational organization that teaches these competencies through its global network of clubs and multiple educational programs. Headquartered in Rancho Santa Margarita, California, the organization currently has more than 15,900 clubs in 142 countries, with a membership exceeding 345,000.

While improving public speaking skills is one of Toastmasters’ most obvious goals, the organization offers an array of other valuable benefits that can significantly improve your professional standing.

Communication and Leadership Skills Can Pay Off in the Business World

Effective communication and strong leadership go hand-in-hand. This concept is not unique to Toastmasters.

One study found that managers and executives around the world cite communication skills as the most critical component of effective leadership. What’s more, world-famous business leaders like Sir Richard Branson and Warren Buffett claim that strong communication skills were the single biggest factor in their career success.

“Communication is the most important skill any leader can possess,” Branson wrote in his Virgin blog. “I realized very early on that the entrepreneurs who make a difference know how to relate to and interact with other people.”

So how does Toastmasters help its members stand out in job interviews and become better leaders? Through real-life experience. Toastmasters’ weekly club meetings are specifically designed to allow members to improve their communication and leadership skills in an encouraging and supportive environment.

During the first half of a typical meeting, members volunteer to give prepared speeches, and then other members provide the speakers with feedback and coaching. The second half of the meeting features extemporaneous speeches, where members are given a couple of minutes to talk about a random topic without any preparation.

Education is a Crucial Step to Becoming a Toastmaster

In addition to the club meetings, education is another critical element in Toastmasters’ mission to create more effective communicators and leaders. The organization’s original education program is comprised of two tracks: Communication and Leadership. The tracks are self-paced, and members progress by completing a series of different projects, with numerous opportunities for awards and recognition along the way.

All of Toastmasters’ education programs are designed to work in tandem with club meetings. For example, when the Communication track requires a member to deliver a speech, that speech is presented and evaluated during a club meeting. Similarly, many projects in the Leadership track are completed by serving in various club roles. Pairing the club experience with the education program in this way provides for experiential learning that’s based on real-world scenarios.

Starting in 2010, Toastmasters began developing a new education program known as Pathways to modernize the learning experience and make it better suited for our evolving global society and technology. Pathways is not a departure from the original program — it builds upon the program’s proven foundation for enhancing communication and leadership skills, while providing additional benefits.

At Toastmasters meetings, members learn to communicate through active participation.

Toastmasters began rolling out Pathways in February 2017, and the program offers 10 different paths for members to choose from. Each path is based on five core competencies: public speaking, interpersonal communication, management, strategic leadership, and confidence.

As with the original program, Pathways requires members to complete a series of projects to demonstrate their mastery of the subject matter. Unlike the original program, which relied solely on printed manuals, the Pathways curriculum is available both online and in print, so you can access the material from anywhere there’s an internet connection.

Pathways starts with an initial online assessment of one’s skills, interests, and goals, and from there, the program recommends three paths that best match the responses. However, members aren’t required to work on the recommended paths and may select the ones they prefer. By providing the option to choose from several different paths, the program is customized to fit members’ individual goals, allowing them to learn the specific skills they need to improve their lives.

Members navigate the Pathways program using Base Camp, its online learning management system. Through Base Camp, members can access all of the program’s materials such as the curriculum, feedback forums, and transcripts. Additionally, Base Camp also provides a collection of engaging learning tools, including videos, quizzes, interactive activities, helpful tips, and other resources.

Join or Start Your Own Club for Hands-On Training

One of the best things about Toastmasters is that you’ll find its clubs anywhere around the world. In fact, large cities often boast dozens of different clubs within the same geographic area. To locate a club near you, use the organization’s Find a Club tool. It’s free to attend club meetings as a guest, and you won’t be required to speak when visiting.

If you can’t find a Toastmasters club near you, you can start your own by following five simple steps. Or if you work for a company that’s interested in building leaders from within, your organization can join thousands of other employers like Walt Disney, Google, and Microsoft that sponsor in-house clubs for their staff.

Another great aspect of Toastmasters is that it’s inexpensive. While you might pay hundreds or even thousands of dollars for other programs that teach similar skills, Toastmasters membership dues typically run $45 every six months, along with a one-time fee of $20 for new members.

Toastmasters International — ‘Where Leaders are Made’

In 2011, Toastmasters underwent rebranding to focus more on leadership and increase awareness of its impact around the world. As part of the rebranding, the company launched the new tagline: “Where Leaders are Made.” While most people are aware that Toastmasters helps improve public speaking skills, the organization’s efforts to build better leaders are less well-known.

“For many people, Toastmasters is synonymous with public speaking, but we are much more than that,” said Toastmasters International President Pat Johnson.

One reason the organization’s leadership development efforts are less prominent is because the primary way Toastmasters teaches leadership is by helping people become better communicators. During research for the rebranding, Toastmasters Executive Director Daniel Rex spoke with numerous people who articulated the connection between the two skill sets.

“We heard loud and clear from the members and leaders we spoke with that the Toastmasters program helped them gain the competence in communication that gave them the confidence to lead others,” Daniel said. “This is the foundation of our program.”

Indeed, the competence and confidence gained through Toastmasters can improve members’ lives, much like in the case of Matt. Whether you’re looking to impress a potential employer during a job interview, successfully negotiate a raise, improve your personal relationships, or motivate your employees, Toastmasters is an unparalleled resource for both personal and professional growth.