The Institute for Justice Study, “License to Work,” Challenges Unnecessary and Costly Licensing Requirements in the Workforce 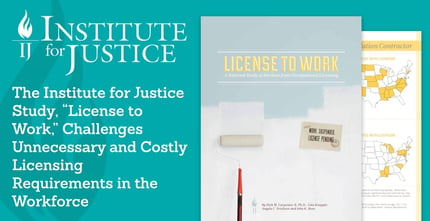 In a Nutshell: While it makes sense for certain occupations, such as medical professionals and attorneys, to require licenses to practice, the Institute for Justice (IJ) argues that many other jobs should not have licensing requirements. In its study, “License to Work,” the public interest law firm presents its argument that licenses often present barriers to entry into certain low- to moderate-income fields. The study examined 102 occupations across all 50 states and Washington, D.C. IJ experts also argue that many licensing requirements are initiated from within the licensed industry in an effort to reduce competition. The institute fights burdensome licensing through litigation on behalf of individuals and by working with legislators to change current laws.

If I went to my doctor’s office and somehow discovered that she was not licensed to practice medicine, I would quietly back out of the office, question all the medical advice she had given me, and quickly find a new — licensed — doctor.

Medical licenses clearly exist to protect the health of individuals by ensuring that medical professionals are up to date on the latest practices and have sufficient medical knowledge to perform their jobs properly. Similarly, licensing requirements for occupations such as dentists, and engineers are in place to protect public health and safety.

I know that I would not want to drive across a bridge designed by an engineer with a lapsed license.

But the Virginia-based public interest law firm, the Institute for Justice (IJ), argues that a large number of other occupations — many of them in fields that pay low to moderate salaries — should not require a license for people to enter the fields.

“IJ litigates to limit the size and scope of government power and to ensure that all Americans have the right to control their own destinies as free and responsible members of society,” according to the organization’s website.

“Issues surrounding economic liberty typically take the form of occupational licensing, which are often unnecessary or irrational barriers to entry into an occupation of choice,” Carpenter said.

In 2012, the institute released “License to Work: A National Study of Burdens from Occupational Licensing,” written by Carpenter, and colleagues Lisa Knepper and John Ross. It was the first national study to measure how licensing can be a burden for lower-income workers and aspiring entrepreneurs.

IJ released the second edition of the study in 2017.

“When most people think of licensing, they picture physicians or attorneys — occupations like that,” Carpenter said. “They’re surprised to learn that, in our data set, for instance, there are licenses required to work as a florist, a furniture upholsterer, and a funeral attendant.”

Paying licensing fees for those and many other jobs, including ones that are ideal for people entering or reentering the workforce, is more difficult for people with fewer financial means, he said.

Dick Carpenter is the Director of Strategic Research at the Institute for Justice.

Carpenter said he outlined the licensing issue in his 2016 book, “Bottleneckers: Gaming the Government for Power and Private Profit.”

“In the book, we describe how licenses are overwhelmingly created by legislators at the request of the industry to be licensed,” he said. “It’s not consumers going to the legislature and banging down the door, begging for protection.”

Rather, licensing is driven by industry leaders with their hands out asking for a law to be passed that restricts entry into their own occupation, he said.

“It puts a bottleneck in place that restricts competition,” Carpenter said. “The argument they make is that a license is necessary to protect public health and safety. But when you study it as we have, we’ve discovered that rarely are these requests accompanied by actual evidence of threats to public safety.”

He said that, without systematic evidence of an unlicensed practice being a threat to the public, the primary benefit of mandatory licensing appears to be to keep out competitors.

“And there’s a mountain of research indicating that licensing is one of those rare public policies that does exactly what it’s designed to do,” he said. “It keeps people out.”

By reducing competition, he said, those who are inside that licensing fence are able to artificially inflate wages that are passed along in the form of higher prices to consumers.

“As you can imagine, when you’re gathering the licensing requirements of 102 low- to moderate-income occupations in all 50 states plus Washington, D.C., it’s a giant job,” Carpenter said.

The team began gathering the data in 2007 for the task that would take five years to complete.

The Institute for Justice is currently litigating 59 cases in 29 states and Washington, D.C.

The other innovative aspect of the report was how the research team was able to combine the extensive data in a way that enabled it to rate and rank all of the states and all of the occupations in the study. This feature makes it easy for lawmakers and other interested parties to compare laws and identify where reforms are the most needed.

“Since that time, it played a very central role in Obama’s White House report,” Carpenter said. “And others have started taking similar approaches to measuring the burdens of occupational licensing as well.”

The report revealed that, on average, occupational licensing forces aspiring workers to spend nine months in education or training, pay more than $200 in fees, and pass an exam. And about one-third of licenses take over a year to earn.

“Barriers like these make it harder for people to find jobs and build new businesses that create jobs, particularly minorities, those of lesser means and those with less education,” according to the Institute for Justice website. “‘License to Work’ recommends reducing or removing needless licensing barriers.”

“One of the things we engage in is suing states that have these unnecessary licenses,” Carpenter said. “We represent individuals who want to work in an occupation but face unnecessary and irrational burdens.”

He said IJ brings lawsuits to open up opportunities that advance economic liberty for all.

The Institute for Justice also works to put standards in place that would require that systematic evidence of a threat to public health and safety be demonstrated prior to new licenses being created.

“And if there is such evidence, legislators must go through a process by which they examine and adopt the least restrictive alternative to licensing that meets those needs,” Carpenter said. “We’re trying to help legislators understand how this can be a very beneficial process when codified into state law.”

He said IJ is currently working with elected officials in Florida to reduce or eliminate licensing requirements for a number of occupations.

Addressing the burdens of occupational licensing is just one of many causes the Institute for Justice focuses on in the fight for economic liberty. Carpenter said the organization works in the areas of property rights, school choice, and free speech.

“Since 1991, IJ has come to the aid of individuals who want to do the simple things every American has the right to do — including own property, start and grow a business, speak freely about commerce or politics, and provide their children with a good education — but can’t because they find the government in their way,” according to the website.

The firm has litigated more than 250 cases over the years, including seven before the U.S. Supreme Court, according to the website. And it has won six out of seven of the Supreme Court cases.