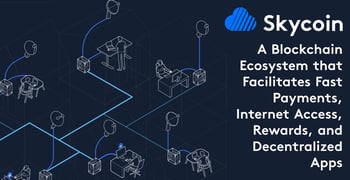 In a Nutshell: More than just a cryptocurrency, Skycoin is a whole ecosystem of blockchain-related products and services. By advancing transactions speeds, increasing security, eliminating mining rewards, and pursuing other developments, the company seeks to provide a better blockchain experience. And Skycoin users can earn cash on the side through its Skyminer project, which is the infrastructure that supports its mesh Skywire internet system. The company also launched its own hardware wallet — Skywallet — for maximum security.

Since the introduction of cryptocurrency and blockchains a decade ago, the young technology has seen tremendous growth and expanded to use cases beyond what most people could have imagined back in 2010.

Even Bitcoin, the original cryptocurrency, quickly evolved from a digital payment method to a speculative investment asset. Meanwhile, blockchain technology, which was originally used to publicly verify cryptocurrency transactions, is now used in a wide number of applications. Not only does the blockchain document crypto transactions, but it has proven useful in a wide range of industries, including hospitality, supply chain, and travel.

But consumers were always interested in how they could earn money from cryptocurrency. Originally, the possibility of profiting from Bitcoin and other cryptos was limited to crypto miners. Early on, mining digital coins and tokens was a way for nearly anybody with the know-how to earn extra money by receiving small portions of the coins as a reward for their work.

The mining game quickly moved beyond the reach of the average consumer, however, with the advent of super-machines solely dedicated to mining cryptocurrencies, 24/7 home miners were pushed out of the space.

Since then, speculative investments have been the main way for crypto enthusiasts to make money from digital currencies.

But Skycoin — a decentralized blockchain ecosystem — offers another route for crypto fans to earn passive income through its Skyminer platform.

We recently had the opportunity to speak with Skycoin’s project figurehead, who goes by the name of Synth, about the Skycoin ecosystem, and we’ve learned more about how users can generate income on the side with Skyminer.

Skycoin Aims to Promote Real-World Crypto Usage Rather Than Speculation

“Skycoin’s a really complicated project — it’s almost 10 years old now. It launched the same week as Litecoin,” Synth said. “We have a programming language for blockchain development, there’s a 3D video game engine running on (Skycoin), and there’s a platform for launching your own blockchain called Fiber.”

This introduction alludes to just how Skycoin is truly a multi-faceted ecosystem in the blockchain space.

“Skycoin is an entire ecosystem where cryptocurrency is only part of the story,” according to the company whitepaper. “The rest includes the elimination of mining rewards, development of energy-efficient custom hardware, the realization of transaction speeds that rival the likes of Visa, and the advancement of a more secure and private Internet alternative.”

The platform was created as an answer to the shortcomings of other popular blockchains, according to the company.

“Born out of necessity, no other coin was fulfilling (Bitcoin inventor) Satoshi’s original vision of a fully decentralized digital currency,” according to the Skycoin website. “Skycoin functions as a currency with virtually-free transactions, soon-to-be-implemented absolute privacy, and Visa-like speeds with inherent asset-backed value not based on speculation.”

The Skycoin platform is decentralized and free from manipulation through its own consensus algorithm, called Obelisk, according to the company.

“Obelisk was created out of the shortcomings in the Proof of Work (PoW) and Proof of Stake (PoS) algorithms. Obelisk can never be centralized by mining pools or manipulated by shareholders, meaning it is truly decentralized,” according to the website. “Obelisk distributes influence over the network according to a web-of-trust architecture.”

Additionally, users who hold Skycoin generate Coin Hours, which can be used to purchase services on the company’s Skywire network or can be exchanged for more Skycoin.

While Skycoin offers an array of improvements to the blockchain and cryptocurrency spaces, Synth said the average user is most likely to be interested in one particular aspect of Skycoin.

“For the general audience, I think the most important thing that they care about — like if they are investment-oriented, they’re asking, ‘How do I make money?’” Synth said. 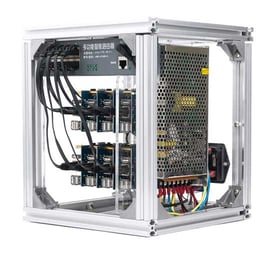 The Skywire mesh internet infrastructure is facilitated by Skyminer hardware.

That’s where Skyminer comes in. Skyminer isn’t a mining application in the traditional sense. It’s a way for those in the Skycoin ecosystem to help deliver low-cost, reliable internet to others through the forthcoming Skywire mesh internet network.

“Skywire is the next evolutionary step in the internet’s development and use,” according to the company. “We want to break the chokehold that internet service providers (ISPs) have on the market by giving the power back to the people. We are doing this by providing a decentralized community-driven mesh network where users themselves will own and control the network’s infrastructure.”

Through Skywire, the company’s goal is to provide everyone with access to fast, secure, private, and reliable internet.

So, how does Skyminer play into all this? Skyminer is the hardware that supports the Skywire platform. And, in theory, nearly anyone can participate in the Skywire-Skyminer process.

“Basically, you go buy your hardware, you set it up, and you’re paid coins every month for running the infrastructure and basically forwarding data for other people,” Synth said.

As an example, he said, a small farming community may not have internet access through regular service providers because the companies may not deem it worthwhile to run a fiber optic line to a rural location for just a couple of hundred customers.

“So, what are you going to do? You have to basically build your own internet infrastructure,” Synth said. “We enable a community like that to build their own infrastructure. And the people who have that infrastructure can also get paid for it. It’s sort of like earning money in your sleep.”

He said that, as long as users have the Skyminer equipment and electricity, it’s a great way to earn extra income, and it allows people to take control of the internet.

“We also created our own hardware wallet — Skywallet — which launched a few months ago,” Synth said.

The sleek device was designed with both security and style in mind.

“When you store or access your cryptocurrency, you are your own bank, so the process should be simple and intuitive,” according to the company. “Your hardware wallet is your bank vault and it should feel like a premium and secure device. We’ve spent months iterating over designs and incorporating user feedback in order to make Skywallet the best hardware wallet experience on the market.” 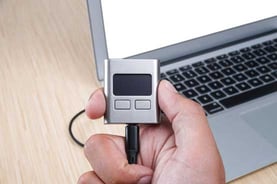 Skycoin believes that hardware wallets are the most secure way to store digital coins, according to the company white paper.

“Hardware wallets are physical electronic devices designed to securely store cryptocurrency funds,” the paper continues. “They are designed to isolate private keys from online environments; a hacker would have to physically take the device to access the private keys.”

And, in the event that something does go wrong with the wallet, Skycoin’s recovery seed serves as a backup for the Skywallet.

“If your device is lost or damaged, you can recover your wallets using the seed phrase,” according to the company. “It is generated on your device and only shown once. It should go without saying that if somebody finds your seed, they can easily clone your device.”

Skycoin advises users to never store the seed or communicate it digitally. And the company lets users know that Skycoin support will never ask for your seed.

The Skycoin ecosystem has the potential to add value in a variety of areas in the blockchain space, and for those looking for some extra cash in the crypto space, Skyminer offers the opportunity after investing in the hardware.