Pick My Postcode: A Self-Sustaining Site that Gives Away Free Cash Prizes Daily to UK Residents Based on Their Location 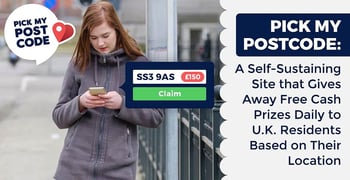 In a Nutshell: Lottery systems have existed for centuries in Europe and the U.K., almost always requiring the purchase of a ticket for a chance to win cash. But one website actually gives participants a chance to win without having to buy anything. Pick My Postcode is a free daily lottery website where users can win cash prizes by entering their postcode and checking in each day. The site has already given away nearly £1 million ($1.32 million) and has amassed more than 2 million members. Its unique business model is funded entirely through advertising revenue, and Pick My Postcode maintains a high level of user trust because it never shares personal data.

Free money. Do any two words in the English language sound better when paired?

But does free money exist, or is it more in the realm of unicorns and polite taxi drivers? Even a lottery typically requires you to purchase a ticket for a chance to win.

Modern lotteries began in Europe in the 15th and 16th centuries as a means of raising money through voluntary — rather than imposed — taxation. Throughout history, lotteries have allowed regular citizens a chance to win a windfall by paying a small amount to play a game of chance.

U.K. residents have had access to some form of a lottery for the past 500 years. In fact, there are dozens of local authority lotteries as well as large and small society lotteries in which to participate. But one lottery gives users the opportunity to win cash without even buying a ticket.

Pick My Postcode is a free daily lottery website where users can win money based on a postcode drawing. As the largest free daily lottery in the U.K., the site has given away nearly £1 million ($1.32 million) over the past eight years and boasts more than 2 million members.

“One in 35 people in the U.K. are members of our website,” said Chris Holbrook, Founder of Pick My Postcode. “We’ve given away prizes to about 20,000 people, so chances are good, if you live in the U.K., that you’ve either won or know someone who has.”

The idea for creating this unique free lottery came to Holbrook, who was a freelance web developer at the time, while he was listening to the radio. He heard a segment discussing the ‘postcode lottery’ in the U.K. The hosts explained how access to certain benefits, including tax advantages, lower insurance prices, even access to health treatments often depend on where you live.

“So when the term Postcode Lottery was mentioned on the radio, I started wondering if you could have a lottery where you could use your postcode instead of putting in arbitrary numbers,” Holbrook said.

Today, Pick My Postcode gives away cash to visitors just for logging on to the website — which is as close to free money as it gets.

A Business Model that Allows the Site to Give Away Money

Although the idea came to him in 2007, it took Holbrook a few years to design and develop the website before launching it in 2011. And success was almost immediate. Holbrook expected the site to start slowly and planned for it to be self-sustaining.

“I’m not a big fan of gambling, so I wondered if I could make it free — like most things on the internet — being mostly paid for by advertising,” Holbrook said. 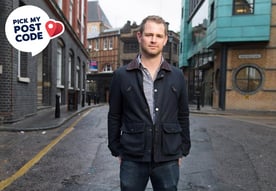 The initial cash winnings were around £10 ($13) a day, as that’s what the ad revenue supported. Holbrook figured he would see what the acceptance rate was and if it would grow enough for him to begin increasing the daily payout. When he raised the amount to £20 ($26) a day, he found that more people were willing to sign up — leading to more advertising revenue.

“As I increased the prize money, more people came to visit the site, which meant I could increase the prize money again, so it became a cycle,” he said.

Visitors enter their postcodes when they sign up on the site. Each day, winning postcodes are selected at random by computer from a list of registered postcodes. Members then log on to see if their postcode has won any of the nine daily drawings. And if no one wins the £500 ($661) main drawing, that money rolls over to the next day.

Each visit to the site takes about a minute and a half, and there’s a potential for 22 winning postcodes. That adds up to as many as 30 to 40 winners a day between all of the different sponsored drawings. Some include a video draw, where users watch a 10-second video before the postcode is revealed, and a survey draw where users answer survey questions before seeing the winning postcode.

The biggest cash payout so far is around £2,500 ($3,305) given out on at least four occasions. And, perhaps unsurprisingly, the bigger the cash prize, the more people visit the site to see if they’ve won.

Pick My Postcode does very little marketing or advertising, instead relying almost exclusively on word of mouth and positive stories shared on social media by prize winners. According to Holbrook, it is enough to simply do right by people and not abuse their trust.

“We’re totally transparent in how we operate, and we never surprise anyone with tricks, so people trust us and they tell their friends about us,” he said.

While some skeptics exist, as might be expected when talking about a website that offers free money, Pick My Postcode enjoys overwhelmingly positive feedback. The key is in explaining to people how advertising works on the internet.

By presenting ads to users based upon interests they’ve previously indicated, marketers can reach a receptive audience, for which they’re happy to pay a premium. This premium revenue stream then gets shared with users in the form of cash winnings.

Pick My Postcode has given money to nearly 20,000 people in the U.K. with more winning each day.

That transparency and trust in advertising quickly become apparent to users — especially if they actually win a drawing. And it leads to a larger pool of satisfied users that quickly overcome skeptics.

“We’re proud to have an extremely engaged community,” Holbrook said. “We have a really vibrant comments section where users participate and help each other out.”

He said that, while people are initially attracted by the chance of winning free money, their interactions soon evolve.

“People realize they appreciate the atmosphere around the website and the community, and it becomes a daily activity that they enjoy,” he said.

The concept for Pick My Postcode began as an experiment, and Holbrook wondered if it was a sustainable endeavor. In the seven years since its launch, the site has proven to be not only sustainable but also a smashing success. But don’t expect Holbrook to rest on his laurels.

Holbrook envisions a future version of Pick My Postcode that is more granular, with each postcode having its own daily draw. Narrower geographic locations would likely attract advertisers that may not have considered targeting an internet audience before. It would also allow for regional small businesses to reach the audiences they serve.

And the Pick My Postcode team has rolled out another site intended for a more specific segment of the market. The new site, called Win a Dinner, was designed with food lovers in mind. And while Pick My Postcode is only open to U.K. residents, Win a Dinner is open to anyone in the world, as long as they’re over 18.

Win a Dinner uses targeted advertising to provide users with the chance to win a meal out, or delivery of a gourmet dinner to their home. By attracting an audience interested in food, advertisers can market a set of appealing products.

“We are creating a place where people — food lovers — can come along and try to win food prizes, and then it will attract food advertisers,” Holbrook said.

And knowing the success he’s had with Pick My Postcode, it wouldn’t be surprising to see the new site take off in the near future.