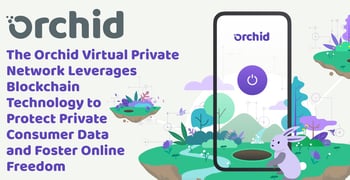 In a Nutshell: In a virtual world filled with data threats, protecting personal information is more critical than ever. That’s why Orchid built a decentralized virtual private network (VPN) platform that allows users to encrypt their sensitive data, disguise their geographic location, and even bypass institutional censorship. The service operates on the proprietary OXT digital currency, and users purchase bandwidth from providers within the network to ensure they receive the best service. And Orchid is expanding its reach to new operating systems and regions to help people around the world protect themselves and embrace their online freedom.

Many cellphone users are vulnerable to a scam called SIM swapping. The SIM card is a small chip that tells the device which network to connect to and which phone number to use. But that SIM card can be exploited by hackers, who may contact carriers and convincingly pose as subscribers using private data exposed in breaches.

After falsifying a user’s identity, they can exploit it to access a mobile device and any online accounts connected to it.

Dr. Steven Waterhouse, CEO and Co-Founder of Orchid, a decentralized virtual private network (VPN) platform, was a target of SIM swapping in 2016. As a Ph.D. in computer science and a veteran of multiple startups, Dr. Waterhouse’s love of building new ventures inspired him to create a VPN to protect himself online. The result was the cryptocurrency-powered Orchid platform.

“VPNs work at the network level to do several things,” Dr. Waterhouse said. “It’s protecting your privacy, protecting you from surveillance, and reducing the amount of censorship you’re getting.”

Through a VPN, data from an internet-connected device is encrypted and sent to a remote server. That server routes the data to its destination — the website. Without access to that remote server, no entity can tell the origin point — or location — of the user.

That also means data — including financial information — is secured behind a wall of anonymity.

Online censorship is not a barrier people often run up against in the United States. But in various political and economic climates around the world, censorship is an everyday reality.

“For example, there are places in the world that filter over 60% of all websites,” Dr. Waterhouse said. “That sounds shocking, and VPNs are a way of life to many people there.” 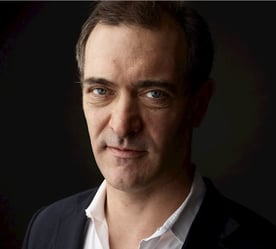 VPNs are useful not just for circumventing government censorship but to avoid media censorship by region as well. For example, a U.S. resident on vacation in Mexico may not have access to certain content from Netflix. This restriction is due to content licensing; users have access to certain content at home, but not on a device operating from a non-domestic internet protocol (IP) address.

“There’s this big fight between VPNs and content providers trying to stop them from doing that because of the licensing structure that’s in place for content today,” Dr. Waterhouse said. “I live on the West Coast of the United States, and I like to watch the BBC’s coverage of the Olympics because it’s better. To do that, I have to use a VPN that makes it look like I’m in London.”

That shows how leveraging VPNs is not just for circumventing oppressive censorship. It has practical applications for everyday use.

“It’s often just people who want to use it to enjoy their lives and do things that seem to be normal to us, but are constrained by some of the structures put in place around their content,” Dr. Waterhouse said.

In many cases, the blocking structures seek to limit the flow of information and access to content. In the case of decentralized cryptocurrencies — which are blockchain-based like Orchid — users are working around government and institutional control over financial structures.

Orchid deploys the same blockchain technology to decentralize control over information access and web mobility. At the same time, it also helps protect data from malicious actors — including hackers — as well as controlling agents.

“With communications, several control structures are in place. It could be companies holding on to data and filtering what you can say and surveilling you for profit,” Dr. Waterhouse said. “Or it could be the government. In the U.S., we had some concerns with revelations about what the NSA has been doing.”

Orchid helps users regain privacy by obscuring those online activities. The sites they visit, the content they consume, and the data they transmit — including financial data and online banking — are effectively hidden from prying eyes. That is true even on open networks like public or semi-public wifi.

“When you go to a conference, or you’re at Starbucks and you’re using one of these open wifi connections, not only can that router at Starbucks or the conference log all your data but also the actual connection is not encrypted,” Dr. Waterhouse said. “Using something like our tool in combination with other things can really boost your protection online.”

As with all digital services, privacy-seekers can choose from a variety of VPN providers. But making that choice is not always an easy task.

“Most of the time, when you go and search for a VPN, you’ll get an affiliate site,” Waterhouse said. “The affiliate site will have a list of different VPN providers that they recommend, but they’re also sponsored by some of those providers. So, you’re not really sure whether it’s the best one out there or some biased opinion.” 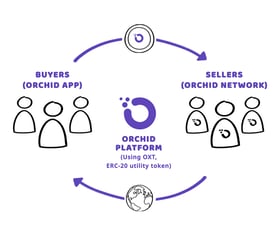 The Orchid platform relies on the OXT digital currency, which runs on the Ethereum blockchain.

Orchid’s decentralized network allows users to purchase bandwidth from a pool of service providers. Those providers must invest in the network to provide service. If the service is poor, users can access other options without having to switch to an entirely different VPN network.

“We believe that our approach of having more of a free market is a fair way to do that,” Dr. Waterhouse said.

Providers sell bandwidth, and users pay for secure connections through the network. Access to the network requires only an Orchid client and the OXT wallet. All transactions are peer-to-peer and conducted with OXT, Orchid’s native digital currency designed for transactions involving bandwidth.

Users pay OXT to providers, who stake OXT to show investment in the network and draw more traffic and higher returns on their investments. That internally competitive model also ensures no single entity gains a monopoly over services within the Orchid network and that users receive quality service at a low cost.

Orchid originated with Dr. Waterhouse’s vision for a decentralized VPN. He also built it transparently so the user community can actively participate and help improve the network.

“One of the unique things about our solution is that it’s completely open-source,” Dr. Waterhouse said. “One of the communication channels we use is Github, which is the way people provide feedback on the code, and they can make improvements. Many people in the community are solving problems for others without us even having to get involved, which is one of the great things about these kinds of projects.”

As of March 2020, Orchid is available on Android, macOS, Linux. An iOS version is in beta testing, and a Windows version is forthcoming. In addition to expanding access across operating systems, the Orchid team is also working to build foreign language support and expand the app’s availability to more locations. Soon, more users around the globe will gain access to equitable, decentralized VPN service.

“Privacy shouldn’t be something scary,” Dr. Waterhouse said. “A VPN should be something that is part of people’s everyday privacy health that they think about. We’ve had some good reactions, and it does seem to be activating people who haven’t really thought about these things before.”