LocalMonero: A P2P Network for Trading Local Currency for the Privacy-Focused Monero Cryptocurrency 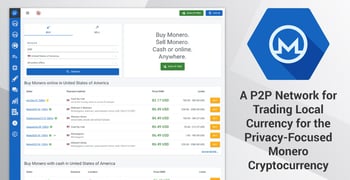 In a Nutshell: Privacy and anonymity are important concerns for many people who use cryptocurrency. While mainstream coins like Bitcoin offer an alternative to traditional financial institutions, they are not truly anonymous because every transaction is easily viewable on the public blockchain ledger. Monero is a cryptocurrency that allays many of the privacy concerns surrounding Bitcoin. And LocalMonero provides a platform for users to trade local currency for Monero with its peer-to-peer network. The secure platform sidesteps centralized exchanges in favor of human interaction. LocalMonero is also helping to drive the adoption of Monero through education articles and the launch of its AgoraDesk service.

When the term cryptocurrency is tossed around, Bitcoin is likely what will come to mind for the average person. Yet, there is a wide range of other cryptocurrencies being mined, bought, sold, and traded in the decentralized blockchain ecosystem.

And while Bitcoin may be the most widely known crypto, a number of crypto enthusiasts don’t necessarily believe it is the best cryptocurrency out there. Some cryptocurrencies are capable of faster transactions than Bitcoin. Others are speculated to have more functionality in the long run. When it comes to identifying the preferred cryptocurrency, it really just depends on a user’s priorities.

Monero is a popular cryptocurrency for those who value privacy, security, and anonymity. Some folks may wonder why privacy is so important if the person conducting those transactions is not doing anything illegal. But consider this — would you want your personal checking account transactions available to be viewed by literally anyone who desired to? Me neither.

Beyond that, privacy is important for a number of practical reasons, including protecting crypto assets from hackers and thieves, private negotiations, and, in some countries, avoiding government censorship.

And, for those who find a privacy-focused coin like Monero appealing, they might be equally interested in LocalMonero. The company adds an extra layer of privacy on top of Monero by facilitating a P2P exchange system.

“We don’t distribute Monero — we just provide a platform for other people to trade Monero in a peer-to-peer manner,” said one of the Co-Founders of LocalMonero, who goes by the pseudonym, Alex.

How the Open-Source, Fungible, and Private Monero Differs from Other Cryptocurrencies

Alex explained that while most people know about Bitcoin, Monero is not nearly as well-known at this point. And while many people have called Monero a privacy coin, Alex said the term is a bit of a misnomer, as privacy should be an inherent component in digital currencies.

But that is not the case with Bitcoin because the Bitcoin blockchain runs on a public, transparent ledger that anyone can see. This is fine for some use cases, but other times, crypto users may prefer not to have all of their transactions publicly accessible.

And that’s one of the major differentiating factors of Monero.

“Monero is not the first iteration of a fully private ledger, but it’s certainly the best,” Alex said. “It’s the most developed, the most sophisticated, and the most supported.”

Monero offers more privacy features than do mainstream cryptocurrencies, such as Bitcoin.

He emphasized — for those who may be new to cryptocurrencies — the importance of understanding that if they transact with Bitcoin, it is not truly private, even if their real-life identity is not associated with their Bitcoin wallet or address.

“It’s still all public and traceable, and it’s forever recorded,” Alex said. “So, even if you’re confident in your ability to disassociate your real-life identity with your Bitcoin address, are you sure it can remain that way forever?”

He said that, with Monero, privacy can truly be achieved.

Another major component for a successful cryptocurrency is fungibility, Alex said.

“Fungibility is a concept in economics,” he said. “It means that one unit of currency is equal to every other unit of the same currency. For example, you know a $100 bill is equal in value to every other $100 bill. They’re all $100. You shouldn’t care which bill you’re holding.”

But with certain cryptocurrencies, including Bitcoin, fungibility can be a concern.

“A Bitcoin that is freshly minted is more valuable than a Bitcoin that has exchanged a few hands already,” Alex said. “The reason why is because a particular Bitcoin may have a history in the criminal market. Maybe it has been used to fund illegal activities.”

So, even if a law-abiding citizen legally purchases and owns a Bitcoin, if that Bitcoin can be traced — through the public ledger — back to criminal activity, then the Bitcoin can become essentially worthless.

“You could be invested in Bitcoin and two years later, your Bitcoin gets added to a government blacklist and nobody will ever accept that Bitcoin, then you lost all your money, completely,” he said.

Again, because of the private and anonymous nature of Monero, the cryptocurrency maintains its fungibility.

The LocalMonero Platform is Based on Human Interaction, not Centralized Exchanges

“At LocalMonero, our goal is to establish a safe and easy-to-use person-to-person platform to allow anyone to trade their local currency for Monero, anywhere,” according to the company website.

LocalMonero users post advertisements to sell their Monero and specify their preferred method to receive payment, including cash, bank transfer, PayPal, gift cards, or other options. Interested buyers then reply to the advertisements.

“LocalMonero escrows the Monero from the user that is the Monero seller in a given trade and releases the Monero to the buyer when the seller confirms that they have received the payment from the buyer,” according to the website.

The company can also help mediate any disputes that may arise during transactions.

“On LocalMonero you are dealing with humans,” according to the website. “Unlike centralized cryptocurrency exchanges, you make a trade directly with another person. This makes the process lean and fast, as there is no corporate overhead.”

Alex said the preferred payment method of LocalMonero users varies from country to country. And, in some cases, it may be more about convenience than absolute privacy.

This type of convenient transaction may be preferred over opening an account on a centralized exchange and going through various KYC and AML processes just to make one simple transaction, Alex said.

One tactic the platform has adopted to help raise awareness about Monero is simply to educate more people about the cryptocurrency.

“We’ve written a lot of guides and articles that we’ve placed on the website to make it easier for people to get into Monero,” Alex said. “We’ve also recently launched a newsletter that’s like a weekly report on what’s happening in the Monero space.”

AgoraDesk facilitates P2P trading for both Bitcoin and Monero.

LocalMonero has launched a new section on its website called Knowledge, where it will post a new article each week that highlights a particular aspect of Monero and how it compares to other cryptocurrencies.

The company has also added a service that incorporates Bitcoin trading, to help attract more users to the platform and expose them to Monero, Alex said.

“In October 2019, we launched AgoraDesk which expands our platform and adds Bitcoin,” he said. “Like it or not, Bitcoin is the mainstream cryptocurrency, so there are now two currencies available for peer-to-peer trading on AgoraDesk — Monero and Bitcoin.”

Alex said the idea behind this offering is that, by putting both cryptocurrencies on equal footing, the company can attract some people who are looking for services similar to LocalBitcoins, which now requires more stringent KYC verification measures than it did in the past.

“At AgoraDesk, our goal is to establish a safe and easy-to-use person-to-person platform to allow anyone to trade their local currency for cryptocurrency and to trade cryptocurrency option contracts, anywhere,” according to the AgoraDesk website.

Ultimately, LocalMonero takes the already secure Monero cryptocurrency and adds a layer of privacy to it that makes it more anonymous than perhaps most crypto coins available today.