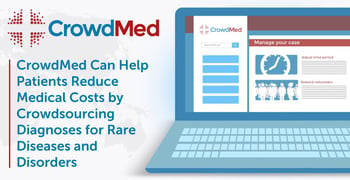 In a Nutshell: CrowdMed offers an innovative solution for people suffering from illnesses, but can’t get the information they need from the traditional medical system. Patients can access crowdsourced medical opinions that supplement standard care in cases of rare, difficult-to-diagnose diseases and disorders. CrowdMed’s proprietary algorithm also factors in the medical experience and conviction of its participants, providing patients with the most likely cause of their ailments. Users can then present those diagnoses to their personal physicians for testing and validation.

Althea didn’t realize she was living with an undiagnosed medical disorder until it cost her the ability to walk. In an instant, her quality of life declined, and her career disappeared, creating a serious financial strain due to the high cost of her health care. With no definitive diagnosis from her doctors and with no alternatives or prospects, she turned to CrowdMed, a platform that crowdsources medical diagnoses of rare illnesses and conditions.

CrowdMed was founded in 2012 to help people like Althea. The platform’s mission was inspired by Founder Jared Heyman’s experience with a difficult diagnosis. When his sister Carly fell ill, his parents put their lives on hold and spent thousands of dollars on physicians and treatments — but saw no results.

“He’d been in tech for a long time, and he knew and understood the power of crowdsourcing as it related to other industries. He knew the basic concept was: The more minds working on a problem, the better the outcome of that problem will be,” said Danyell Jones, CEO of CrowdMed. “He thought he could use that crowdsourcing principle to help his sister figure out what was going on.”

CrowdMed draws on a large pool of doctors and experts from around the world who review difficult, unusual cases and collectively contribute to diagnoses and treatments. This process allows patients to access a vast pool of medical expertise at a fraction of the cost of individual consultations.

And after receiving a diagnosis from CrowdMed, patients can take it to their physician for review and testing to create a comprehensive treatment plan.

“We found that we have more than an 85% accuracy rate of picking out the appropriate diagnosis,” Jones said. “When it comes to common things, that doesn’t sound that impressive. But the cases we see are very uncommon — often rare — diseases and disorders. Someone may have already seen five, six, or seven physicians and a panel of specialists and still can’t get an answer. And there is an 85% chance that we’ll give them the appropriate diagnosis for their case.”

CrowdMed is not a substitute for standard health care, and it is not meant to be a patient’s first stop for diagnosis. Rather, it is a resource for rare or unusual diseases and disorders.

“If it’s something that’s easy to screen with a blood test, that’s something best left to the traditional health care system,” Jones said. “However, almost every one of us knows someone who just doesn’t feel good, and they keep going to the doctor, and the doctor does test after test and just can’t find anything.”

CrowdMed provides an alternative to that endless string of visits to doctors and specialists. Patients can log in to the platform and provide the specific symptoms of their cases, which are reviewed by a pool of medical detectives. These medical detectives interact with the patient throughout the process and then return a detailed diagnosis based on the information provided.

“At the end of the case, a patient will get a synopsis of that work,” Jones said. “It gives them the three diagnoses that are, statistically speaking, most likely to apply to their case. And we encourage them to take that report back to their own physician and have it verified.”

That is why CrowdMed can be such a useful supplement for standard health care. With the work of diagnosing a rare condition taken care of, the patient’s physician can focus on developing an effective treatment program.

And the process can save patients money, as it involves high-level medical expertise with a high accuracy rate. That allows them to avoid incurring medical costs piling up as physician after physician tries, and fails, to figure out the medical issue.

Crowdsourcing depends on the contributions of experts, including trained and licensed physicians, who can provide effective and accurate diagnoses. At the same time, crowdsourcing also depends on a large number of people participating and offering alternative perspectives and ideas.

Through this dynamic, CrowdMed can provide both broad and deep insight into each case.

“We have both,” Jones said. “We want experts, and we also want a large number of people.” 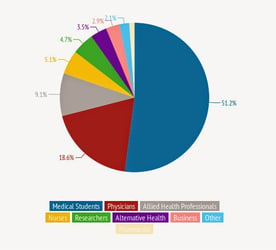 CrowdMed’s medical detectives hail from every level of the health care field and beyond, and all of them share the common desire to help patients. They include nurses, general practitioners, and highly trained specialists who work in niche areas. But these detectives also include medical students and graduates who are still completing their residencies as well as non-traditional medical practitioners.

While the core of the medical detective community consists of educated professionals whose opinions carry the most weight, anyone can participate and help enrich the CrowdMed process.

“The power of the crowd comes from having a vast number of people with many, many different perspectives,” Jones said. “Anyone can be a medical detective.”

A licensed and vetted moderator oversees each patient’s case. These individuals check submissions made by medical detectives for relevancy and review their medical reasoning. That process ensures the patient receives only the best, most accurate information from the CrowdMed community.

Each medical detective receives a rating that ranges from DR1 through DR10 based on the practitioner’s own experience and credentials. A DR10 may be a U.S.-based physician who is certified in a particular specialty, while other levels include professionals like RNs and LPNs. The higher a medical detective is ranked, the greater the weight their opinion carries in diagnoses.

“The science and the beauty behind this lie in our patented algorithm,” Jones said.

Medical detectives allocate a certain number of points to each opinion they put forward. More points indicate higher confidence in the accuracy of their diagnosis. CrowdMed’s proprietary algorithm weights each diagnosis based on the medical detective’s experience (ranking) and conviction (point allocation). 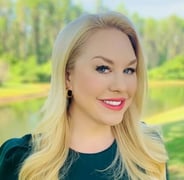 Danyell Jones, CEO of CrowdMed, spoke with us about how the company can help people get affordable, accurate diagnoses.

The output is a statistical likelihood of the accuracy of a diagnosis.

“The more people who participate, the more accurate it becomes,” Jones said. “Essentially, the algorithm brings the top three diagnoses to the top, and it gives you a percentage of the likelihood for each — and not until the consensus is reached, scientifically.”

This method is particularly well-suited to diagnosing rare and obscure diseases. They may be the sorts of disorders that most physicians will never come into contact with and don’t recognize or think to investigate.

“There’s a large number of rare disorders out there — disorders that are baffling, and unless a physician has come into contact with this before, they’re probably not thinking of it. A physician’s trained to think of the most common kind of ailment it could be,” Jones said. “However, if your case is in front of a panel of medical detectives, the odds that someone in that group has experience with your diagnosis or disorder increases.”

CrowdMed provided Althea with a correct diagnosis for her illness, which led to treatment that enabled her to regain the ability to walk and work. And Jared’s sister Carly was found to have a hormonal imbalance that did not register on standard tests. Because it went unnoticed by physicians, her condition worsened. Once the real cause of her malady was discovered and treated, she enjoyed a rapid recovery.

Those success stories demonstrate crowdsourcing’s vast power and potential in the medical community. By bringing different experiences and ideas to bear on a common problem, medical detectives can collectively discover the root of illnesses and arrive at nontraditional treatments.

This method represents a faster, more effective means of finding solutions to challenging and life-threatening illnesses than standard medical methods can provide.

And, instead of meeting with individual specialists, patients can crowdsource these solutions while incurring significantly lower costs. After all, maintaining physical health shouldn’t entail sacrificing financial well-being.

“By the time people come to us, many of them have spent tens of thousands of dollars in the traditional health care system,” Jones said. “When you look at it from a cost-savings perspective for the patient — how much would it cost to see 15 different medical experts — it’s a very cost-effective way to help people who are struggling.”