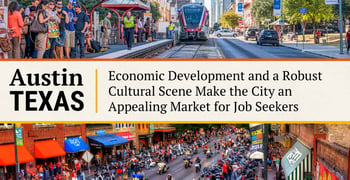 In a Nutshell: When Austin, Texas, comes up in conversation, you may think of live music and great food. But those offerings are just the tip of Austin’s economic iceberg. The city continues to grow rapidly — especially in the tech sector — and job opportunities abound in management, food prep and service, education, and skilled trades. This prosperity is due, in part, to Austin’s thriving culture, which includes sports teams and a vibrant arts scene. The unique blend of leisure and development opportunities makes the city a hot spot for professional advancement and high-level innovation.

Over the last 25 years, Austin, Texas, has seen plenty of growth. And Drew Scheberle, who moved to the city in 1994, has been around for it all. In those early years, he remembers trying to impress a date by getting dressed up and reserving a table at Jeffrey’s, the fanciest restaurant in town.

Scheberle and Jeffrey’s remain in Austin, but the city has also seen an influx of high-end restaurants opened by some of the most talented chefs in the country.

“Jeffrey’s is still here, but there are plenty of other fancy restaurants in town,” said Scheberle, who is now the Senior Vice President of Policy, Advocacy, Mobility, and Talent at the Austin Chamber of Commerce. “You have phenomenal cooking happening here with some Michelin Star-quality chefs plying their trades — and you couldn’t say that 10 or 20 years ago. Part of that stems from the fact that we have the highest per capita income in the state of Texas.”

Drew Scheberle, of the Austin Chamber of Commerce, spoke with us about the city’s growth in a wide range of industries.

And while Austin is now renowned for its cuisine — to go along with its famous live music scene — the city is earning another distinction: as a hub for economic growth. And Austin’s robust development has been driven by continued innovation and people.

“We double in size every 20 to 25 years, which is why we market ourselves as ‘The Human Capital.’ Ensuring that we’ve got an ample supply of talent to cover company growth is a big part of that,” Scheberle said.

The city’s ongoing expansion means it has a constant need for fresh talent, which makes Austin a hot spot for those seeking jobs in a wide variety of fields — including technology, service, and management.

Austin continues to distinguish itself as a welcoming locale for professional opportunity — with a side of legendary music and great food.

According to the Chamber of Commerce’s Job Growth and Unemployment Report, 23,800 new jobs were added in Austin between March 2018 through February 2019. That represents a growth rate of 2.3%. Professional and business services added the greatest number of jobs — 6,200 in total.

The report also states that the seasonally adjusted unemployment rate is 3.0%. This is down from 3.3% in January 2019, and a full point lower than the national unemployment rate of 4.0%, as reported by the Bureau of Labor Statistics.

All of those factors contribute to Austin being the 11th fastest-growing metropolitan area in the United States, which means it offers plentiful prospects for continued development. That is especially true for new additions and expansions in the tech sector.

In the first quarter of 2019, Austin welcomed Brodynt Global Service’s new North American headquarters. Brodynt is a telecommunications firm based in Spain that provides internet access, networking hardware, and managed services to clients in more than 200 countries. Its Austin location will enhance Brodynt’s North American presence with a focus on business development and around-the-clock customer service.

The Austin Chamber of Commerce regularly reports on the city’s growth and provides stats on added jobs.

“This Army Futures Command is something we’re going to look back on in 20 years as our NASA,” Scheberle said. “With so many technologies converging, one of the challenges is always getting capital to fund ideas. National defense in an age of hacking and spying and other kinds of military conflict means we’re going to have a lot of potential here for trying new things.”

But new enterprises aren’t the only ones bringing tech jobs to Austin. Among expanding companies, Apple will be adding 5,000 jobs, Oracle another 2,000, and Amazon will create 800 positions. And the Austin Chamber always updates its website with information about new growth.

Openings in Diverse Sectors Offer Opportunity for All Educational Levels

The second fastest growing field was management, followed by food preparation and service.

“Each month, we put out a job opening report about how many are posted, and we break it down more granularly,” Scheberle said.

The employment rate in Austin, Texas, has tracked closely with labor force availability since 2013.

For instance, of the available jobs posted, 16,300 (35%) pay an annual wage between $30,000 and $65,000. Within this pay scale, 3,200 (20%) jobs require education greater than a high school diploma but less than a bachelor’s degree. That includes 207 postings for apprenticeships in skilled trades — electricians, plumber-pipefitters, steamfitters, and carpenters.

“We’ve got job openings at entry level, mid-level and senior level in tech, healthcare, financial services. We’ve got a diverse set of opportunities across the board here,” Scheberle said. “From a percentage growth standpoint, the greatest job creation was in retail-type jobs. In a lot of the rest of the country, you see a loss.”

Sports Fans, Foodies, and Art Lovers Can All Find Fulfillment in Austin

Thanks to his tenure as an Austin resident, Scheberle can provide some perspective on its growth as well as what it’s really like to live in such a unique city.

“Austin is a place for open-minded people who like to have a good time, don’t take themselves too seriously, and want to do things a different way,” he said. “It’s the best place to see free live music on a Tuesday night anywhere in the world.”

The Greater Austin Area boasts over 120 live music venues, but the city’s offerings extend well beyond music. Residents and visitors can enjoy various art, nature, science, and history museums as well as attractions that include dance, theater, ballet, as well as opera. Beyond permanent institutions, Austin also hosts many annual festivals, including the Austin City Limits Music Festival, the Austin Film Festival, and the South By Southwest Music, Film, and Interactive conference.

And sports fans certainly won’t be at a loss for things to do in Austin. The city is home to the University of Texas — whose football team often ranks among the best in the country. Soccer fans can catch a Bold FC match, while the Austin Spurs have basketball aficionados covered. The Round Rock Express — a minor-league affiliate of MLB’s Texas Rangers — are also based in Austin.

In addition to everything else, you can always fall back on Austin’s oft-vaunted and almost legendary breakfast tacos. This southwestern staple, along with many other foods and culinary offerings, can be found at many of Austin’s popular food trucks as well as its brick-and-mortar dining establishments — including Jeffreys.

An Open-Minded Culture Creates a Hotbed for Innovation

Back in 1994, Scheberle — an East Coast boy who made it a point of pride to get dressed up for his big date at Jeffreys — made a surprising discovery upon entering the restaurant and being seated at his table. “There was Dan Rather, who’s from Austin, at the next table — wearing shorts at the fanciest restaurant in town,” Scheberle said. “The city has evolved quite a bit, but without the pretentiousness.”

Austin is home to innovators and visionaries, but it’s important to keep in mind that most are just hard-working men and women just like the rest of us. What sets them apart is the fact that they are not content with the way things are and have set their sights higher. They want to do things a new way — and their own way.

“This is one of the densest startup areas in the world. You have people who have the audacity to say, ‘This entire industry is dull, and I’m going to be creative in my startup,’” Scheberle said. “This is a town full of people who are generally open to new ideas.”