Reach Your Retirement Goals: How myRA Makes Starting to Save Easy & Affordable

In a Nutshell: Despite growing awareness of the problems with Social Security, almost one-third of working Americans have yet to start saving for retirement. Many, especially those who are self-employed or have low incomes, are balked by high minimum deposit or balance requirements. The U.S. Treasury created myRA, a retirement account with no minimums and no fees, to fill the retirement savings gap. With myRA, workers can deposit any amount, on any schedule that fits their budget. They can then take advantage of the power of compound interest to develop their savings, securely, until they’ve collected enough to transfer to a private retirement account. The myRA program eliminates income or benefits limitations, making it possible for anyone to start saving for retirement.

When I started working, I was in my late teens, and the idea that I may need to start saving for retirement was not something I actually considered. Retirement was a some day idea, a thing to worry about down the road. Of course, at 18, it was difficult to imagine myself at 30, let alone 65 or older.

It wasn’t until I was in my mid-20s, better educated and with a few years of the real world under my belt, that I really became cognizant of the concept of retirement savings. However, because my job didn’t offer benefits — and I had no savings to speak of — I didn’t think that starting a retirement account was an option. 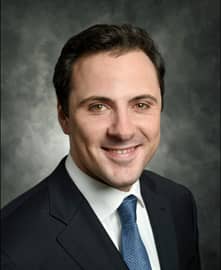 Richard Ludlow is the Executive Director of myRA for the U.S. Treasury.

The fact is, one of every three workers in the private sector do not have access to a company retirement program. The numbers are worse for those who work part time, or those in service industries where benefits are rare.

While a company program would be ideal for many, the real problem with its lack stems from the fact that getting access to a good private program is hard — if not impossible — for the low-income earner, or self-employed worker, who has little principal with which to start investing.

That’s where myRA fills the gap.

“One major barrier people face is that many accounts require minimums; a minimum deposit, or a minimum balance in the thousands,” explained Richard Ludlow, Executive Director of the myRA Program for the U.S. Department of Treasury. “If you’re just getting started, putting away $25 or $50 a month, then you may have trouble accessing a private account.”

Developed by the U.S. Treasury in late 2015, myRA is like a simplified Individual Retirement Account (IRA) — with no minimum deposits or balances, and no fees. “MyRA was designed as a simple, safe, and affordable option for people to get started saving for retirement.”

Anyone Can Start Saving for Retirement With No Minimums

The path toward retirement savings is simple to begin, and almost anyone can use myRA to get started. “Just go to myRA.gov, and click the big ‘signup’ button,” said Richard. “It’s a pretty straightforward process, just like signing up for most bank accounts.”

“There are absolutely no minimums,” Richard stressed. “You can open your account with nothing, and have it there waiting for you when you’re ready.” Your account is even maintained without any fees, which, according to Richard, can really eat into your savings.

Along with no minimum balance, there is no set amount you must contribute, or set schedule you need to follow to make payments. You completely control what you save. “You could contribute as little as a dollar if you wanted,” said Richard. “We see our typical saver is putting in $50-$100 a month.”

Contributions can be made from payroll through direct deposit into a checking account. If you know you may have a hard time maintaining consistent savings, consider having a set amount automatically deducted from your paychecks. Richard also suggests taking advantage of the ability to redirect your tax return to your myRA account.

You can fund your myRA from your paycheck or bank account, or redirect your tax refund.

“More than half of filers get a tax refund, often hundreds of dollars or more,” he said. “We really encourage people to think about putting that refund into a retirement account, and we try to make that easy.”

So how does it actually work? Your myRA is technically a Roth IRA, and the same general rules will apply to your account. “Your contributions are post-tax,” described Richard. “Your interest and your earnings grow tax-free, as opposed to a savings or traditional investment account.”

Because the money you add is post-tax, you can even withdraw your contributions in an emergency. Just be careful not to exceed your own contributions. “You can take out your contributions at any time, without penalty,” Richard confirmed, adding, “but if you took out any of the interest, you would be taxed, and there would be a 10% penalty — just like a typical retirement account.”

There’s no risk involved when you save through your myRA, either. Your investments will be put toward a U.S. Treasury bond, giving you a consistent return without worry that you’ll lose your principal. “We’ve found that first-time savers are often pretty risk averse,” explained Richard. “They don’t initially want to go through the ups and downs of the market.”

The main difference between your myRA and a more traditional 401K or IRA is that myRA is truly meant to be a starting account. “Our goal is to help people go from non-savers to savers, to build up some savings,” said Richard. “Once they have several thousand dollars, there are a lot of great options in the private market for more diversified, long-term investments.”

In fact, your myRA will max out entirely at $15,000 (or age-out at 30 years). At this point, you’ll be expected to transfer your funds to a private IRA, though it’s encouraged you do so as soon as you qualify.

“We set the $15,000 limit to reinforce that the goal is for this to be a starter account,” Richard explained. “We actually hope that people do so before they reach the cap, but $15,000 is the absolute limit.”

The Importance of Retirement Savings & The Power of Compound Interest

The unfortunate truth is many of today’s workers will likely be heavily reliant upon their own personal retirement savings to fund their golden years. To get the most out of those savings, you should start saving as early as possible, no matter how small the amount you can afford to put away. The largest force you have on your side when saving for retirement is time.

Retirement accounts, myRA included, operate on the power of compound interest. To demonstrate its power, let’s look at four people who each retired at age 65. Each started their retirement account with a zero balance and saved $250 a month while they were contributing. 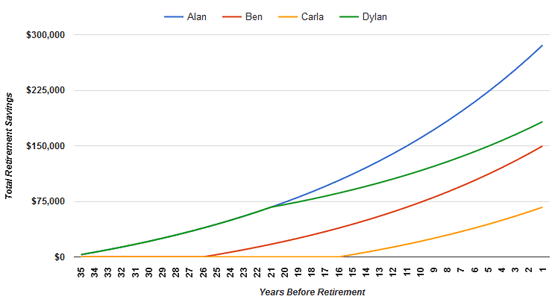 The graph shows the effect of compound interest on the savings of four workers who each retired at 65.

It should be of little surprise to see that Alan saved significantly more than his counterparts, and Carla significantly less. What may be shocking to realize is despite Ben and Dylan contributing for the same length of time, Dylan actually saved quite a bit more by the time they both retired. This is because Dylan started investing sooner, allowing more time for her money to collect interest.

I was nearly in my 30s before I actually got a job that offered benefits, and I started saving for retirement. Today, I mourn those lost years of compound interest and wish I’d had the ability to join a program like myRA.

Regardless of how much you can contribute, it’s never too early to start saving for retirement — or too late. Even Carla (from our previous example), who didn’t start saving until later in life, would have managed to amass nearly $75,000 by retirement, which is hardly an insignificant amount.

Of course, had Carla started saving in her 20s or 30s, even a small amount like $25 a month, she could have increased her retirement savings by tens of thousands over the course of her working life.

Don’t let your income or benefits status stop you from enjoying your golden years. Take advantage of myRA to give your retirement savings a jump-start, and get on your way to a comfortable retirement.

Brittney Mayer
Brittney Mayer is a credit strategist and contributing editor for BadCredit.org, where she uses her extensive research background to write comprehensive consumer guides aimed at helping readers make educated financial decisions on the path to building better credit. Leveraging her vast knowledge of the financial industry, Brittney’s work can be found on a variety of websites, including the National Foundation for Credit Counseling, US News & World Report, NBC News,TheSimpleDollar.com, CreditRepair.com, Lexington Law, CardRates.com, and CreditCards.com, among others.
1.8k followers
6.5k followers
◄ 1 of 5 ►