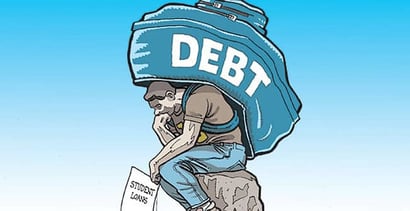 This just in: Consumer spending accounts for fully one-third of the spending in the U.S. economy. OK, so maybe that’s not breaking news.

In fact, slow consumer spending has played a large part in the meager economic recovery we’ve seen over the past few years.

But what’s actually news is the release of a study showing  high student loan debt is contributing to slow consumer spending – which is hurting our economy even further.

A dramatic rise in student debt.

The study, based on research from the Federal Reserve Bank of New York, shows a dramatic rise in student debt over the past decade.

In 2012, 43 percent of Americans under the age of 25 had student debt. That compares with only 25 percent just a decade earlier. The study also shows the average amount of debt has nearly doubled – going from $10,649 to $20,326 in the same period.

While it may be hard to see a correlation between student loan debt and economic activity, the study makes some other very interesting observations.

we have to worry about economic prosperity.”

It seems until recently younger Americans with student debt were actually more likely to finance the purchase of a house or a car than those without any student debt.

But that has now changed. For the first time, indebted younger Americans are now less likely to make those purchases than those with no debt.

What this means is fewer of the potentially higher earners who graduate from college have enough money left over to spend on purchases that contribute to our economic growth.

That’s significant because young people have traditionally been a demographic that buys more goods than others in our society.

Rising student debt is eating into housing and auto markets.

And since housing and auto sales have played such a large role in whatever economic expansion we’ve seen in the past few years, that is potentially a very bad sign for where our economy is heading.

No one can argue obtaining a college degree is the best way to ensure individual economic prosperity.

But when rising tuition rates and increasing cost of living drive up student loan debt by 100 percent in a decade, we have to begin worrying as much about our overall economic prosperity as well.