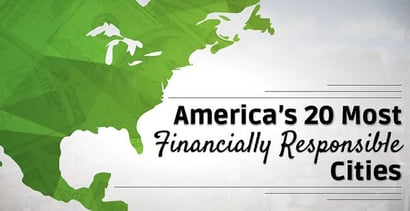 Experian recently released its fifth annual State of Credit report, measuring the financial health of more than 200 cities and metropolitan areas across the U.S.

Measuring factors like each city’s average VantageScore©(a credit score developed by the three major credit reporting bureaus Experian, Equifax and Transunion), the study aims to provide “a comprehensive look at the credit health of consumers across America.”

We ranked each the residents of each city based on their average score, credit utilization, debt and outstanding balance to determine the 20 most financially responsible cities in the U.S.

While Presque Isle, Maine, is one of the smallest cities on our list with a population of roughly 9,600, it beat out 187 other cities that didn’t make the list — no small feat indeed.

Fun fact: Presque Isle is no island. Its name comes from the french word for peninsula, presqu’île, formed by the Aroostook River and Pesque Isle Stream nearby.

A few decades ago, the U.S. Treasury Department’s Bureau of Public Debt relocated to Parkersburg, West Virginia. from Washington, D.C. — perhaps all of that fiscal responsibility rubbed off on its citizens!

Parkersburg has enjoyed much economic prosperity over its 204-year life, thanks to being a hub for transportation, industry and medical services dating as far back as the Civil War. Let’s hope that financial boon continues for many years more.

Despite having a land area of less than 9 square miles, Traverse City, Michigan punches above its weight when it comes to impressive accolades: TripAdvisor named it the number two small town travel destination in 2009, while U.S. News called it one of the top 10 best places to retire in 2012.

Ever had a tart cherry? There’s a good chance it came from Traverse City! They produce 70 to 75 percent of the fruits in the U.S.

Binghamton, New York truly lives up to its nickname as the “Valley of Opportunity.” Several of America’s greatest companies — IBM, General Electric, Dick’s Spiorting Goods and Lockheed Martin (to name a few) — had or continue to have their headquarters in the Binghamton area.

With little debt and ample career opportunities, its citizens have plenty of time to enjoy local attractions like the Roberson Museum and Science Center, the Binghamton Philharmonic or the Minor League baseball team the Binghamton Mets.

Humans have been cultivating the Evansville, Indiana, area for more than 10,000 years. From the time of the ancient “Mound Builders” to its status as one of the largest cities in Indiana, Evansville has probably gotten by for so long due to its money-savvy citizens.

If you’re ever passing through Evansville, be sure to check out one of its excellent minor league sports teams, the Mesker Park Zoo and Botanic Garden, the historic Victory Theatre or the West Side Nut Club Fall Festival in early October.

Nestled in the Allegheny Mountains of the Appalachians is the humble town of Johnstown, Pennsylvania, home to one of the nation’s hardiest populations when it comes to economic setbacks.

Not only has Johnstown seen in decline in its local industry over the past few decades, but the town itself has been plagued with catastrophic floods over the years. Perhaps hardships like these have taught its citizens to be especially conservative with their personal finances.

Davenport, Iowa, is the largest of the “Quad Cities” metropolitan area (also including Bettendorf, Iowa; Rock Island, Maine; and East Moline, Illinois). Davenport and its three neighbors have enjoyed healthy commerce and trade over the years due to their advantageous position at the confluence of the Rock and Mississippi Rivers.

Davenporters are definitely smart with their money — how else did they rank second on Yahoo! Finance’s list of U.S. cities that beat the housing market bust?

Madison is not only the capital of the state of Wisconsin, but it’s also a regional hub of economic, industrial, educational and cultural activity as well.

Much of the residents of Madison enjoy higher-than-average prosperity when it comes to personal finances — the city has consistently ranked as one of the best places in the U.S. to live and work.

Never heard of Ottumwa, Iowa? Then you’re definitely missing out. This bustling little town is home to some of Iowa’s most finance-savvy residents and several one-of-a-kind landmarks and oddities.

For example, Ottumwa has made a name for itself as the “Video Game Capital of the World” as the home of Twin Galaxies, the company responsible for the U.S. National Video Game Team, several video game world championships and even a video game film festival.

On the edges of the Cedar River sits the appropriately-named Cedar Rapids, Iowa. The second largest city in the state, Cedar Rapids is the birthplace of several uncanny individuals like the Wright Brothers, Ashton Kutcher, Elijah Wood, American Gothic painter Grant Wood and inventor of the modern trampoline George Nissen.

Citizens of Cedar Rapids definitely have a great quality of life — not only are they financially responsible, but they also have access to plenty of great activities, including a vibrant minor league sports culture, more than 3,360 acres of recreational-use green space, the Cedar Rapids Museum of Art and plenty more.

Quincy, Illinois, truly is a “Gem City” thanks to its incredibly low cost of living, which may explain in part how they earned the number 10 spot on this list.

It’s a marvel how these citizens aren’t in more debt, considering the multiple floods they’ve had to endure from the nearby Mississippi River over the years. Despite the hardship, they still managed to rank number eight on Forbes’ 2010 list of best small cities to raise a family — what’s their secret?

Named after America’s 16th president, Abraham Lincoln, Nebraska has exploded over in the 147 since it was originally formed from the village of Lancaster.

While much of Lincoln’s financial prosperity comes from the service industries, companies from the finance, publishing, pharmaceutical, communications and transportation industries definitely contribute to its thriving economy (and was even named the number six best place for business and careers by Forbes).

The people of Marquette, Michigan, are a lucky lot — not only do they live among the Huron Mountains, one of the most beautiful and underrated natural landscapes in the country, but they also have an excellent standard of living thanks in large part to their brilliant money management skills.

The city also has the distinct (albeit unusual) honor of having the world’s largest wooden dome in the world. Marquette’s 5.1 acre Superior Dome (colloquially known as the “YooderDome”) beat out its Japanese runner-up by 1 square foot.

Not far from Traverse City (number 18 on our list), Alpena, Michigan, sells itself as a “warm and friendly port” town, despite having heavy snowfall roughly half the year.

Alpena is home to one of the largest limestone quarries in the world and produces millions of tons of cement annually. It’s also home to Temple Beth El, one of the few surviving American synagogues built before 1900.

Located on the south fork of the Zumbro River, Rochester, Minnesota is home to the famous St. Marys Hospital established by legendary medical doctor William Mayo.

But the residents of Rochester aren’t just physically healthy — their finances have a near perfect bill of health, as well. They consistently rank among publications like Money Magazine, Kiplinger and U.S. News and World Report for their economic vitality and quality of life.

Coming in at number four on our list, Green Bay, Wisconsin, is more than just the home of a great professional football team (10-4 this season as of publish).

It’s a fantastic city in its own right, from its thousands of honest, hardworking blue-collar workers to its multiple centers of the arts and natural history to its esteemed institutions of higher education.

Named after the popular sport cultivated by Iroquois and other Native Americans, La Crosse, Wisconsin, enjoys plenty of economic growth thanks to its prime position on the Mississippi River.

Because this bustling hub of industry, commerce and transportation by day with a vibrant downtown social scene at night ranked number three on our list, it’s clear the residents of La Crosse like to work hard, play hard and live within their means.

Of course, data alone can’t define a city. We’ll leave that work to the city’s highlights, such as its excellent educational system, natural scenery ripe for outdoor recreation and wholesome cultural hotspots like the Sibley Park Zoo and the Twin River Arts center.

If you haven’t noticed by now, the people of Wisconsin are particularly smart with their money, but none more so than the fiscally-minded folks of Wausau.

The city built on the French colonial fur trade continues to enjoy economic success today thanks to its bountiful manufacturing, insurance and tourism industries. And, fun fact, they grow a lot of ginseng as well.

Tips for Having Good Credit in 2014

How Does the U.S. Government Calculate the National Debt?