25 Money Songs That’ll Get Stuck in Your Head 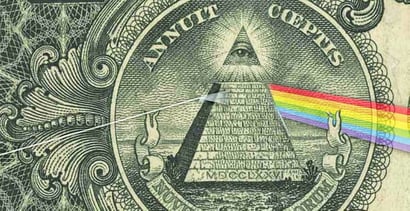 Take a break from your money worries and focus on something else – like songs about money.

Here are 25 money songs all about greenbacks and the love-hate relationship we have with them.

This 1970s favorite reminds us of the perks of having lots of money “in a rich man’s world.”

Favorite line: “I wouldn’t have to work at all/I’d fool around and have a ball”

24. “She Works Hard for the Money” by Donna Summer

Hitting #3 on the Billboard Top 100, this song is based on an actual encounter with a bathroom attendant.

Favorite line: “She’ll never sell out, she never will/Not for a dollar bill”

We want to hang out with Oprah and the Queen!

Favorite line: “We in recession but let me take a crack at it”

With an unusual time signature, this song on money is sure to keep your attention.

Favorite line: “Share it fairly but don’t take a slice of my pie”

The lesson on this one? Bringing in the dough can also bring in the issues.

Favorite line: “And I’m bigger than the city lights down in Times Square”

20. “Take the Money and Run” by Steve Miller Band

When you decide to cut loose, maybe you shouldn’t take the money and run.

You should do things because you love them, even if the paycheck is a nice bonus.

Money can go either way – it does a lot of good and a lot of bad.

Favorite line: “It’s a Cinderella story/On a tumble of the dice”

The lesson? Money has a lot of power. Don’t let it control you.

Favorite line: “It will keep on changing, changing up your mind”

Be careful of people who are only after your money!

Favorite line: “Get down girl, go ‘head, get down”

Wondering what you can do if you have some extra money? This song will give you some suggestions.

Favorite line: “A buck or a pound/Is all that makes the world go around”

14. “Money for Nothing” by Dire Straits

There’s a reason we’re all jealous of rockstars – this lists just a few of them.

Favorite line: “That ain’t workin’ that’s the way you do it”

We may be well intending, but as this song points out, you still need money for those intentions.

Favorite line: “So before we die let me do something nice”

Favorite line: “Scoop the pearls up from the sea/Cash them in and buy you all the things you need”

This one warns of the kind of shenanigans you can get into with too much money.

Favorite line: “Look the dog won’t bark if you don’t lark about”

Be warned – this one’s explicit. It focuses on what dollars can do. They “might turn to a million.”

They say money can’t buy happiness, but it buys things that make you happy!

Favorite line: “What it don’t get, I can’t use”

It’s important to admit when you’re obsessed, especially if it’s with money!

Favorite line: “You know that I’m married to the money”

The gist of this one is you should play like you work – like someone’s going to pay you for it.

Favorite line: “Took your mama nine months to make you/Might as well shake what your mama gave you”

This one’s short and catchy – there’s nothing like payday!

Favorite line: “It’s the root of evil and you know the rest/but it’s way ahead of what’s second best.”

4. “We Need Some Money” by Chuck Brown

At 31:25, you’ll remember what it is you always loved having money on hand.

Favorite line: “I ain’t got nothing against no credit cards, but the cash is the best”

It’s always nice to dream about the things we would do, if only we had the money!

2. “Make the Money” by Macklemore

With money, it’s important to stay true to yourself. “Make the money, don’t let the money make you.”

Favorite line: “Time to look at the man in the mirror until I can learn to love him”

1. “Diaper Money” by The Lonely Island

As an adult, you often are forced into being more fiscally responsible, even when you don’t want to be.

Favorite line: “So I stay on my hustle/To keep my pocketbook thick”

What is a Bitcoin?

A Practical Approach to Saving Money